Funding Circle plans to cut 125 jobs in Berlin and Amsterdam

Peer-to-peer (P2P) lending firm Funding Circle is planning to cut 125 jobs across its Amsterdam and Berlin locations as it pivots back towards its UK home market. 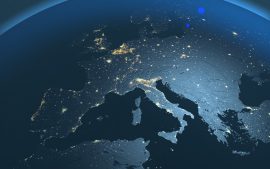 Funding Circle is going to focus on local partners in Europe

Chief executive Samir Desai told Reuters that the firm will keep a team of 25 in its London HQ dedicated to running its European business.

Funding Circle is going to focus on partnering with local banks in Germany and the Netherlands.

The announcement comes after Funding Circle announced a loss of £84 million for 2019, which the firm has blamed on its performance in its European markets.

Total loans under management hit a record £3.7 billion for the firm, signalling a 19% year-on-year rise. Funding Circle claims that 80,000 small firms have accessed funding through its services.

The P2P business planned to raise £300 million in a late 2018 IPO, with investors hoping that the firm’s valuation might hit £2 billion.

Instead its shares tumbled on the first day of trading, dropping as much as 24% below the planned float price.

Since then, the firm’s shares have fallen in value by as much as 87%.