Copper, the US-based challenger bank aimed at teenagers, has launched its app and announced its waiting list is now open.

Founded in Washington, the bank joins the likes of the US family finance app Jassby and teen bank AWSM, which all aim to assist their young users with financial literacy.

Copper says it “teaches teens how to make smart financial decisions”, by driving “patterned behaviors” in a “supervised app experience”. This is very similar to AWSM, whose CEO Gennadiy Khayutin told FinTech Futures it was trying to create an offering which builds a habit out of the financial education in a controlled environment.

This interest in financial literacy may stem from the 2015 Standard & Poor’s Global survey which says 43% of America’s adults are not financially literate.

This figure has not changed a great deal in five years, largely due to a lack of companies and educational institutions being able to crack the right mix of ingredients for effective financial teachings to teens.

Some states have tried to instill specific laws to tackle it. Last June, Florida ruled that all public high schools in the state should offer personal finance as a one-semester elective course, and by the end of 2019 financial literacy classes were required for high school graduations in 19 states. This is up from the 13 states which offered them eight years ago. 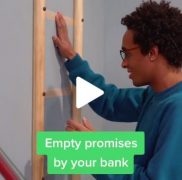 Trying to tap this space as a fintech newcomer, Copper has not revealed its launch date yet but has opened a waiting list to teens. It has also started up its own TikTok account to gain some traction on its brand., which currently has 3,490 followers (at the time of publication).

The challenger says it’s built “specifically for teenagers”, allowing users to send money requests to their parents, spend money online through a debit card or through Apple Pay, and receive money rewards for saving certain amounts of cash each month.

The bank is FDIC-insured and currently has a growing number of nine employees, according to LinkedIn. Its co-founders are Eddie Behringer and Stefan Berglund, who also co-founded Snap! Raise, a social donation platform now with more than 346 employees.

North America has received an influx of new challenger banks over the past two weeks. The challenger for ‘working America’ Branch teamed up with Cardtronics, California-based Zero created Level Bank, Canada’s ATB Financial launched its digital bank Brightside, and Neo Financial announced its 2020 launch plans in the Canadian Prairies.