As incumbent banks across the globe are forced to move as much of their operations as possible from on-premise to working from home environments, many have questioned how ready bank systems really are for this type of monumental shift in operations.

Rumours of banks lacking basic technology such as laptops or working VPNs, have circulated the industry, showing how some firms are struggling to migrate employees.

Those which are mid or pre-legacy overhaul are likely to have faced some of the biggest challenges, as a lack of cloud-based technology makes it hard to access data remotely.

Some banks may even be forced to put their technology overhauls completely on hold. Employees at HSBC were told that if the coronavirus does become a long-term crisis, then its $6 billion restructure could face lengthy delays, as revealed by the Financial Times.

The bank has two big headquarters employing 8,000 people in Amsterdam

Though many banks declined to comment on how their operations had adapted amid the ongoing coronavirus outbreak, ABN Amro – Netherland’s third largest bank – agreed to share parts of its internal strategy with FinTech Futures.

After taking basic precautionary measures, which included monitoring the outbreak since its origination in China last year, introducing hand sanitiser points in offices, and limiting work travel to certain countries, ABN Amro decided to step up its efforts beyond the Dutch government’s requirements.

Team A and Team B

“We were even a little bit stricter than them,” says a member of the communications team at ABN Amro, Jarco de Swart.

He refers to the bank’s decision to divide itself into ‘A’ and ‘B’ teams, which came into effect for employees more than two weeks ago.

The bank has two big headquarters employing 8,000 people in Amsterdam, a city where hospitals are gearing up large ‘Corona Care Units’ equipped with CT scans to help facilitate an anticipated influx in patients.

ABN Amro, was aware that it cannot allow all its staff to work from home due to technology constraints and instilled physical dividers in its two HQs.

“We have literally physically separated and divided those offices,” says de Swart, highlighting that his own office has been divided at each floor into six compartments to help contain the spread and avoid sending a whole floor or building home.

For the Dutch bank, essential on-premise workers, or what it calls “first division”, include those working on global markets, such as stock transactions, and those overseeing corporate spending transactions for clients.

These jobs, which are bound by some of the heaviest layers of security in the whole organisation, are what underpin large amounts of the bank’s incomes, so it’s critical that they keep running, business as usual.

Lots of ABN Amro’s branches are also still open, as the bank sees these points of contact as essential. All branch staff sit behind sheets of glass to help curb the contagion.

Fellow Amsterdam-headquartered bank ING has determined its key workers by splitting certain operations and separating around 250 employees into “critical functions” across locations such as Singapore, London, Amsterdam, and New York. 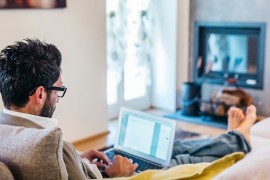 “Getting over 10,000 people on the VPN network who are working from home was a challenge,” says de Swart

The employees cover divisions in its treasury, financial markets and back offices payments and technology infrastructure.

As for the technology challenges ABN Amro has faced, de Swart does not deny that there were some bumps in the road when working from home first rolled-out on a mass scale.

“Getting over 10,000 people on the VPN network who are working from home was a challenge,” he says, speaking to some of the issues faced in the industry.

But de Swart says after the first couple of days and a few “hiccups” later, the bank had set a “clear communication” strategy which helped employees solve these technical issues.

Major US banks on Wall Street have struggled to allow big numbers of employees to work from home due to perceived technology constraints.

Wells Fargo’s branch, call centre, and operations centre employees were all branded as “essential workers” last week, but this classification system caused some unrest. According to Reuters, some Wells Fargo employees have since argued that they can do everything their job requires with the tools they have at home.

Another big concern for many of ABN Amro’s employees, including de Swart, was the issue of childcare as the Netherlands took the decision to close schools down in mid-March.

Still uncertain on the stance the Dutch government will take on exams, the likes of de Swart, a parent of two, have had to take on the new priority of both supporting and home-schooling their children in the interim.

This has led to the bank encouraging “non-prime” and “prime” hour working, which allows parents to looking after their children in the day and work in the evening or in the early hours of the morning.

“You can divide your time with family and home-schooling, and then pick up some of the work in the evening hours,” says de Swart. “It’s helping enormously.”

“Nobody’s demanding that you are online during prime hours. Everybody is fully understanding that we have kids at home and that they need teaching. This is very important with exam times coming up.” 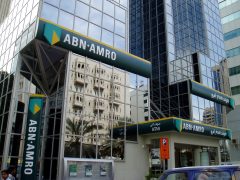 For fintechs, the new imposed working conditions are helping them ramp up their demand in the banking sector

Although de Stewart could not directly answer any questions regarding the bank’s technology investments, he did note that he has no reason to see those investments being impacted, “other than maybe management focusing its attention on managing this crisis and seeing how we can get through this.”

He confirms that the bank’s “ongoing investment plans and restructuring plans” are still going ahead.

For fintechs, the new imposed working conditions are helping them increase their demand in the banking sector. Symphony, a Palo Alto-based instant messaging service for bankers, has seen an influx in usage across more of banks’ divisions and even by some of their suppliers.

Symphony CEO David Gurle told American Banker last week that the firm was dealing with surges of messaging activity ranging from 80% to 500%. It has also seen an increase in the use of its attachment feature, which was previously met with some hesitation by banks over security concerns.

With increased demand, it’s therefore likely that various fintechs are receiving greater investments from banks, which are rapidly becoming wholly reliant on them to operate.

Amid all of these operational changes, de Swart points out the glaring differences between now and the financial crash ten years ago.

“We are a solid bank, we’re well-capitalised and times are very different to 2008, when we closed,” he says. “We are standing by them [our customers] this time. We were part of the problem then, but now we can be part of the solution.”

de Swart says this difference in attitude can be felt at a government level too. “The atmosphere around coordination and cooperation between government and the banking sector is really different from 2008,” he says.

“I’ve talked to people from the government. Now there’s a really good sense that we’re going to do this together.”

de Swart’s sentiment echoes that of many shared by the world’s leaders, including UK prime minister Boris Johnson, who told Brits last week that the government would serve the people first, and not the banks.