British fintech companies attracted almost double the amount of global investments last year, but 88% of it was made up of the Worldpay mega deal in March 2019.

A report by KPMG says 2019 saw $48.5 billion (£37.4 billion) in global investments for the UK fintech scene, but $42.5 billion of this comes from the value of a major acquisition deal which saw FIS buy Worldpay. 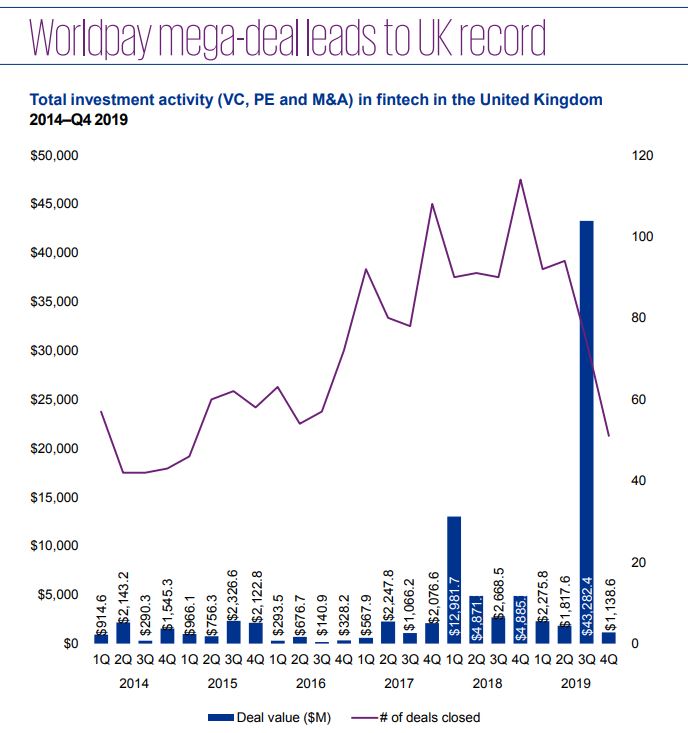 The remaining $6 billion is then made up of smaller VC funding rounds and deals. “Total fintech investment in Europe skyrocketed in 2019, driven primarily by the $42.5 billion acquisition of payments processing company Worldpay by FIS [which closed] in July,” the report reads.

In 2018, KPMG said investments in UK fintech hit $25.4 billion (£19.7 billion). Although it was made up of smaller deals such as Revolut’s $250 million and Monzo’s $110 million fundraises, it still hinged on the acquisition of WorldPay by Vantiv, which was valued at $12.86 billion.

This means if you take off the two acquisitions of Worldpay included in the UK’s 2018 and 2019 fintech investment totals, KPMG’s metrics suggest UK fintech investments folded in half rather than doubled over the two years, decreasing by $6.5 billion.

Despite this, Starling Bank’s CEO Anne Boden tells City AM that UK fintech is experiencing a “high-growth phase”.

Last year ended on an average deal count of roughly 50, just a couple more deals above the 48 deal average 2018 ended on – showing the jump from $25.4 billion to $48.5 billion is by no means synonymous with an equally large jump in the number of fintechs being invested in.

Rather, both numbers rest heavily on mergers and acquisitions in the fintech space.

“The quarter-over-quarter downturn in fintech volume in Europe is doubtless affected by private market data collection lags,” the report reasons. “It should be noted that volume is still returning to levels closer to historical averages.”

Two other reports came out earlier this year which excluded mergers and acquisitions, focusing purely on money raised by UK-founded fintechs, which was a number between $4-5 billion.