Oracle is being sued by Frankfurt-based Union Investment, the investment arm of DZ Bank with roughly $389 billion in assets, due to alleged claims that the software provider inflated its cloud revenues.

Accused of “systematically coercing and bribing” existing customers into cloud migrations, Oracle has now been met with another complaint filed with the federal District Court in California by Union Investment to try and persuade judge Beth Labson Freeman to hear the case for the third time.

Two previous tries have already been made to bring the complaints to court. One by the City of Sunrise Firefighters’ Pension Fund in August 2018 which was 19 pages long, and another by Union Investment in March 2019 which was 107 pages. Both were pushed back because of a lack of sufficient evidence linking to specific laws. 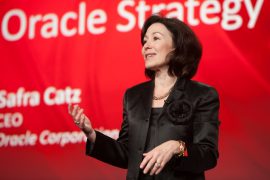 This time Union Investment has come back with a bumper 164-page complaint, which outlines its accusations with yet more evidence. The filing names Oracle’s late CEO Mark Hurd’s estate, current CEO Safra Catz, and former Oracle cloud boss Thomas Kurian all as defendants, having allegedly profited from selling Oracle shares at inflated prices off the back of insider knowledge on the cloud business.

“Oracle was largely unable to sell its defect-ridden cloud technology in bona fide transactions, as very few customers actually wanted to buy it,” the new complaints reads. “Yet the company had to show burgeoning cloud sales in order to remain viable in the eyes of investors.”

It is true that Oracle’s stocks have continued to play cloud-catch-up with competitors such as Microsft, Amazon, and Google, in recent years. Oracle’s fourth quarter fiscal earnings were better than expected, seeing a 1% year-over-year revenue growth to $11.14 billion prompting its widest profit margin in five years, but the figures still trail behind its cloud rivals.

Oracle’s former cloud boss Kurian, who has been in charge of rival Google Cloud Platform (GCP) for the last year, is quoted from a 2017 email in the complaint which where he says Oracle’s Human Capital Management (HCM) Cloud user interface is “a disgrace”.

“I continue to get extraordinary pressure from our two CEOs [the late Mark Hurd, and Safra Catz] and LJE [Larry Ellison] himself that the UI is not tenable […] the core product UI [user interface] is awful,” he says, adding: “Until you [the HCM dev team] all collectively accept the mess you have made and the need to move quickly we are talking past one another.

The complaint says Oracle “would install its on-premises software in the clients’ ecosystem with a variety of preferences automatically enabled that, unbeknownst to the customer, caused the customer to arguably – and unknowingly – exceed the limits of its license.”

It says this “trap” would lead to an Oracle-led audit for customer violations, and when it found them it would “threaten to impose extremely large penalties” unless the customer signed up to a “neither desired nor intended” short-term cloud subscription.

Oracle says the complaint, which largely relies on press and analyst reports, “has no merit and Oracle will vigorously defend against these claims.”

Read next: LAPO Microfinance Bank in tech overhaul with Oracle