The Port of Salalah, the largest port in Oman, has signed up to use a blockchain supply chain platform founded by IBM and Maersk.

The platform, called TradeLens, has partnered with the port to deliver a “digital transformation in its day to day operation” according to the Times of Oman. 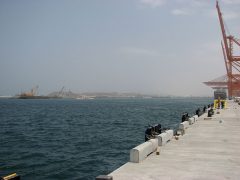 By connecting everyone in the supply chain to one platform, the cloud-based system allows data on each deal to be stored and accessed securely by all parties. The blockchain component means deal participants such as the ports, customs authorities and ocean carriers can all track shipments and share documents throughout the trade process.

Permissioned blockchains are becoming a popular solution for international trade, as the technology offers much more transparency and up-to-date information which in turn improves efficiency. It also lends itself to open architecture such as application programming interfaces (APIs), which TradeLens also uses.

“Joining TradeLens is an important step forward for Port of Salalah in supporting the modernising of the trade ecosystem,” says the port’s CEO Mark Hardiman, who highlights “logistics” as one Oman’s key pillars for “economic diversification”.

“Adopting and incorporating blockchain technology into all aspects of the supply chain will not only enhance the attractiveness of Salalah for these companies but also support the development of new business models that can further leverage the geographical location of Salalah.”

Oman’s exports are largely made up of oil and gas, which account fro 70% of total exports according to Trading Economics. The country’s main trading partners are United Arab Emirates and Japan.

Maersk said in a previous statement that of TradeLens’ 100 participants, it serves five of the six largest container shipping firms alongside ports and regulators.

This week it was also reported that TradeLens got an exemption from the 1984 US Shipping Act. The exemption allows documents to be shared down the supply line with permissioned parties on a platform like TradeLens’ and authorises the use of APIs to access the data. The agreement becomes effective on 6 February 2020.