The Financial Conduct Authority (FCA) has ruled that UK banks must offer one interest rate for all easy access savings accounts in a bid to save customers a collective £260 million.

The regulator says competition “is not working well” for the some 40 million British customers using UK banks for their savings, who it says are currently left with “poor outcomes”. 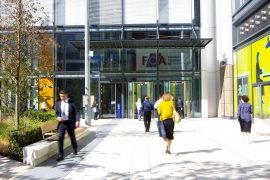 FCA: Banks need to compete for all their customers

On Thursday the Bank of England’s Mark Carney hinted again at the prospect of interest rates being slashed following an announcement by the bank’s monetary policy committee – which decides on the official rate – in November calling for an immediate cut. Despite coming out of a decade of record-low interest rates, the market expects 2020 will see the rate drop by 0.25%.

The FCA says that whilst its ruling could see the most attractive interest rates drop “very slightly”, the regulator is certain rates for those sitting at the least competitive end of the market – namely longstanding customers – will see an increase overall.

The regulator says it aims “to improve competition in the market, encouraging firms to increase the interest rates they offer as well as protecting those consumers that currently receive the lowest interest rates”.

Founder of MoneySavingExpert.com Martin Lewis appeared on Good Morning Britain this week calling some of the current rates offered by big banks “spit-worthily low”. Lewis concludes on the FCA’s new ruling: “I think it’s positive for all the people who never look after their savings and just leave them sitting somewhere, and negative for people who are always on top of their savings and look after them.”

Major bank Lloyds currently offers an interest rate of 0.20% annual equivalent rate (AER) on its basic Standard Saver account, whilst it offers 2.5% AER for its newest customers on the Club Lloyds Monthly Saver – and customers who opened the latter account between 2016 and 2017 still get 3.00% AER. These figures show the extent of variance between interest rates offered on accounts by some big banks.

The FCA’s director of strategy and competition Christopher Woolard notes that until now banks have been “gradually reducing interest rates over time”, highlighting the importance to make banks “compete for all their customers”.

“The new rate will also make it easier for savers to know whether they are getting a good deal after any introductory offer has expired,” adds Woolard on why the regulator chose a 12 month flexibility period.

The rules are now out for consultation and the regulator expects feedback back by 9 April 2020.