Christopher Giancarlo, otherwise known as ‘Crypto Dad’ for his advocacy of cryptocurrency, is planning to promote a blockchain-based US dollar in a new think tank.

According to a report seen by the Wall Street Journal on 16 January, the former chairman of the Commodity Futures Trading Commission (CFTC) Giancarlo will be setting up the non-profit Digital Dollar Foundation in a bid to promote research and development around the benefits of digitising the US dollar. 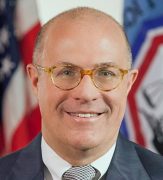 Accenture, “as lead architect and technology innovation partner”, is backing the newly-established think tank alongside Giancarlo’s Digital Dollar Project. The digital consulting and technology firm has already made its ties with cryptocurrency development clear, most recently partnering with Sweden’s central bank last month to create an e-krona.

China and the Bahamas are two other countries which revealed late last year that they are also working on digital versions of their currencies. Whilst China wants to track money flowing through its borders, reduce cash circulation and rival private companies’ digital currency projects such as Facebook’s Libra, the Bahamas’ central bank wants to streamline its tourist economy and tap swathes of the population currently excluded due to remoteness from physical banking services.

Unlike these countries, the US has seen a great deal of reluctance by regulators to promote cryptocurrency, for fear it could lead to money laundering and terrorism financing risks.

“We are launching the Digital Dollar Project to catalyze a digital, tokenised US currency that would coexist with other Federal Reserve liabilities and serve as a settlement medium to meet the demands of the new digital world and a cheaper, faster and more inclusive global financial system,” Giancarlo says in a statement issued by Accenture.

Former CFTC official Daniel Gorfine, who led the regulator’s fintech research, and Giancarlo’s brother Charles Giancarlo, who has worked for IT firm Cisco Systems and private-equity firm Silver Lake Partners, are both founding and heading up the foundation alongside Giancarlo.

Accenture says it will develop a framework for potential, practical steps that can then be taken to establish a dollar central bank digital currency (CBDC).

“There has been minimal innovation in central bank money since the proliferation of bank notes and cashless transfers during the 19th century,” says Accenture in a statement, “a digital dollar would offer new scope and possibilities for the secure and instantaneous settlement in dollars through consumer banks and trusted payment intermediaries”.