Financial services have been too slow to cut investment in fossil fuels, a delay that could lead to a sharp increase in global temperatures, says Bank of England’s (BoE) Governor, Mark Carney in a BBC radio interview. 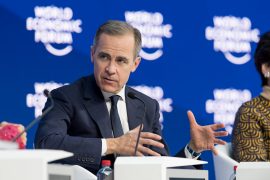 Carney is due to become the United Nations’ special envoy for climate change.

Carney, due to become the United Nations’ special envoy for climate change when he steps down from the bank on 31 January 2020, told BBC radio on 30 December that global warming could render the assets of many financial companies worthless.

Carney cited pension fund analysis that showed the policies of companies pointed to global warming of 3.7 to 3.8 degrees Celsius, compared with the 1.5-degree target outlined in the Paris Agreement on climate change.

“The concern is whether we will spend another decade doing worthy things but not enough… and we will blow through the 1.5C mark very quickly,” Carney said in a radio program guest edited by teenage environmental campaigner Greta Thunberg.

“As a consequence, the climate will stabilise at the much higher level.”

Carney said the financial sector had made a lot of progress in disclosing the risks to their assets from climate change, but he warned that progress was not fast enough.

He called on political leaders to effect change today and avoid selective information and spin.

“To deliver, there needs to be shared understanding about what’s necessary. [But] it is reasonable for there to be debates at the margin about where the role of the state stops and what the role of the markets is,” says Carney.

He notes that there would need to be a mix of public investment and change driven by financial markets because of their power to reflect judgments about the future value of assets in a world affected by climate change.

Earlier this month, the BoE said Britain’s top banks and insurers should be tested together for the first time in 2021 to quantify the potential financial damage from climate change on their businesses.