Al-paca it in: Monzo co-founder leaves to farm Alpacas

Monzo’s co-founder and deputy CEO Paul Rippon has announced his departure from the UK challenger to focus on his new business which consists of farming Alpacas with his wife.

Called ‘Barnacre Alpacas’, the business was built from scratch by the couple and is based on a farm in Northumberland. 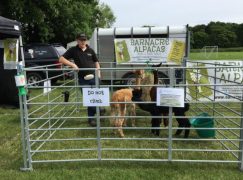 “You’ll find me doing the feed rounds, hosting alpaca walk ’n’ talks and driving my tractor,” says Rippon in a LinkedIn post. “With no farming background or experience we now have over 300 alpacas and welcome many visitors to our farm and holiday cottages.”

Having built the challenger up from scratch to 3.5 million customers and 1,500 staff, Rippon says his 27 years working in the financial services is finally up, after his last eight years working away from his home in the North East.

“Building a fast growing bank takes its toll and even reducing my ‘work hours’ didn’t reduce the cognitive and emotional overhead,” says Rippon.

Prior to Monzo, Rippon also helped start up fellow UK challenger Starling Bank as its chief risk officer (CRO) for a year. He also directed risk at Lloyds Bank for a time and for just over a year he headed up banking operations at Allied Irish Bank (AIB).

Just last November, Monzo also lost its chief operating officer (COO) Tom Foster-Carter, who left to launch a grocery start-up. Foster-Carter told The Sunday Times he wanted to develop tech which will “help the incumbents” in the supermarket price wars.

Read next: Snoop picks OpenWrks to power its open banking