Where has trust gone – can banks even recover their standing in the community? 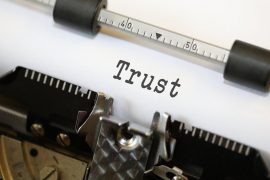 When England ended the transportation of its unwanted criminal class to America to instead rerouting them to Australia, I have to believe that in time these colonials so transported to the ends of the earth would end their transgressions. Not for them would there be any value in continuing with their former criminal ways.

While it may be considered that England shipped its future entrepreneurs out of the country  if you were hungry, stealing a loaf of bread seemed to make sense – it is becoming apparent that with the passage of centuries, bad habits die hard.

It has only been twelve months since I set foot back in old Sydney town. It was the occasion of Sibos 2018 and for the week of this event the spotlight was focused on the financial industry. All sorts of royal commissions and local government committees were in the final stages of trying to understand what went wrong with the banks. At that time I even wrote of ANZ CEO Shayne Elliott as he told Sibos attendees that as a bank, ANZ would be “looking at the past and at our failures” just as he acknowledged that there going to be “cultural changes to address past indiscretions while (the bank) addressed digital transformation”.

Whenever you read about the Royal Commission, particularly when it has as wide a scope as its full title suggested, “The Royal Commission into Misconduct in the Banking, Superannuation and Financial Services“, you would have to believe that ultimately, it would all get sorted out. Misconduct eliminated from the scene: truth would emerge and trust would be returned to the very bastions that underpin the new Australia. When it comes to a country that prides itself on stable government, knowledge workers and yes, a robust economic environment with a strong and vibrant currency why would there be any need to misbehave?. But alas, even with the final report forthcoming only a matter of months ago, it seems that the industry isn’t quite sorted itself out as yet with even more heads rolling.

Back when Commissioner Hayne provided his final report on 1 February 2019, one phrase caught my eye. “I am not as confident as I would wish to be that the lessons of the past have been learned,” wrote Commissioner Hayne. “More particularly, I was not persuaded that NAB [National Bank of Australia] is willing to accept the necessary responsibility for deciding, for itself, what is the right thing to do, and then having its staff act accordingly.” NAB, along with ANZ, Westpac and the Commonwealth Bank of Australia (CBA) anchor the country’s banking infrastructure. And while it is not necessary to call out the Australian banking community for all that ails the global economy it is worth noting that they provide a fine example of entrepreneurs gone bad.

In case you missed the news coming out of Australia in 2018 even as the Royal Commission was hard at it, CBA made headlines when it was fined AUD 700 million. As one publication noted at the time, “considering that CBA’s violations were inadvertent, due to technical glitches, and attributable to a mistaken belief about existing systems satisfying legal obligations, the AUD 700 million fine might be excessive”. And what were the technical glitches? CBA “introduced Intelligent Deposit Machines (IDMs) without conducting an independent risk assessment and/or instituting mitigation procedures to tackle money-laundering. Unlike older ATMs, IDMs process cash deposits and make the funds available for transfer immediately. Clearly, criminals could use these features to launder cash gained through crime. CBA wrongly believed that its existing ATM monitoring processes covered these risks.”

While a staggering amount at the time, it was subsequently beaten when HSBC was penalised $1.26 billion for “wilfully failing” to maintain proper money-laundering controls. However, these failures were all in the past and there had to be a change of heart in Australia, surely. But no, not so fast! Roll the tape to late 2019 where you can read about Westpac and its current failure. Australian financial crime agency Australian Transaction Reports and Analysis Centre (Austrac) has filed a lawsuit against Westpac, accusing it of allowing payments between known child exploiters, and that 23 million transactions moved through the bank violated anti-money laundering (AML) protocols. A possible fine of AUD1+ trillion was even mentioned if each breach was individually penalised.

For Westpac, the potential fine could go as high as AUD 21 million for each and every one of the 23 million transactions Westpac failed to monitor adequately. It will probably come down a lot, but in the meantime, just the thought of this has brought down its current CEO, Brian Hartzer. And yes, Chairman Lindsay Maxsted is stepping down earlier than planned.

At the heart of the Royal Commission on “misconduct” were unfair practices that simply drained investors’ bank accounts via fees – a return to former colonial bushranger times, no less. At a time when mid-level management was the focus of attention it seems that at the very top, executives really didn’t understand the implications of technology. The thought that this could happen due to technical glitches appalls all those in IT working with financial institutions.

As for that other former colony, much the same has happened at US Bank suffering a similar outcome following lax controls and allegations that it too didn’t handle AML all that well. A $613 million fine was levied.

But here’s what bothers many in the industry – HSBC and ANZ are both aggressively pursuing digital transformations that will overhaul their platforms, introduce open APIs and much more. But can they actually pull such transformations off or will we be reading about more bad news in the future? Can we really trust them when it comes to better serving the customers? Stability in the banking sector has underpinned the growth of western democracies but are these foundations in such disrepair that collapse is imminent?

It is against this background that you have to wonder, can fintechs be any worse? While calling out Australian financial institutions they aren’t alone even as their failings made headlines worldwide. Trust is central to reliance on any financial instrument or agency – can we so easily dismiss the PayPal, Square, Stripe, Robinhood and more recently big new entrants like Apple and even Amazon?

In following the industry, even as technologists aware of the nature of software and all the technical glitches that can happen, there’s less of an issue these days when it comes to siding with fintechs. Australian operatives may drift back to the bad old days of bushrangers and convicts and perhaps they will continue to hoodwink communities, but they are doing so at their own peril.

In throwing open their vaults and helping themselves as they sneak out through the back door, as they apparently continue to do, they are throwing open the front doors to competitors the community can trust even more. And when it comes to trust, who you gonna call may come down to simply pulling up an icon on your smartphone. For that, traditional banks are increasingly finding that they only have themselves to blame. Cultural changes? Digital transformation? Lessons learnt? Apparently not! How about a return to good old honesty before traditional banks find themselves not only locking the back door but facing a future where the front doors are locked for them!