Its business online banking service Bankline also suffered similar downtime on Friday, which follows a string of complaints made by business customers earlier in the week about other instances of downtime which stopped them applying for Help to Buy ISAs days before the 30 November deadline.

From around 9AM on the 29 November, personal account customers flooded the bank with social media messages saying they couldn’t see how much money they had or move money between their current and savings accounts without the money disappearing. 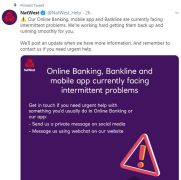 The bank acknowledged the issue at 10:38am

The bank acknowledged the issue at 10:38AM, posting online: “Our Online Banking, mobile app and Bankline are currently facing intermittent problems. We’re working hard getting them back up and running smoothly for you.”

Some customers disagreed with the use of the word “intermittent”, calling it “more like epic failure” and saying the downtime had been happening since 8:00AM. At 2:50PM, more than four hours after the bank’s initial tweet to customers, it updated them saying its online banking, mobile app and Bankline service were all still “facing intermittent problems” with no confirmation of when they’d be fixed.

Users said pending transactions were disappearing, causing them to think they had more money than they thought, or that account to account payments weren’t clearing properly causing many to worry about where their money was sitting.

Many said they were leaving the bank as a direct result of the downtime, with others calling the bank to action: “It’s been 5 hours and all they [NatWest] can say is ‘we’re looking into it’. Not good enough, thousands of people are left without money with bills to pay, do something about it,” one customer said on Twitter.

Customers shared their frustrations with the reduction in bank branches meaning they have to rely heavily on NatWest’s online banking services.

“When you close all the branches and make online the only option this is totally unacceptable. Where are your backup services. An outage should last no longer than 30mins. Your IT needs more money spending on it,” one NatWest customer tweeted. 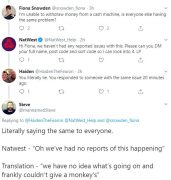 Multiple customers also tweeted that ATMs weren’t dispensing money to NatWest users. The bank consistently came back to customers saying they hadn’t heard of this problem, to which customers accused the back of lying by screenshotting and linking them to other replies to the same complaint.

The downtime  comes just a month after the UK Treasury called on regulators to hold banks to account for an “unacceptable” amount of IT failures.

The Treasury Select Committee said higher fines should be imposed on banks and financial institutions, and that better data recording of failures should be held.

Steve Baker MP, lead member for the Treasury’s enquiry, said: “The number of IT failures that have occurred in the financial services sector […] and the harm caused to consumers is unacceptable.”