Nationwide has invested an undisclosed stake in local charity app Percent, a platform which gets people to spend at partnered retailers which will donate a percentage of their purchase to a charity or “local good cause” of their choice. 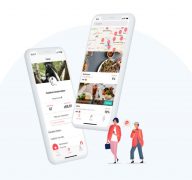 This latest investment is part of the UK bank’s £50 million venture fund dedicated to fintech investments, which has backed fellow British start-ups including energy bill saver Switchd and digital lettings agency Bunk this year too.

The bank also opened an API sandbox for mortgage processing last month, which allows third party systems to connect with Nationwide’s credit risk and back office systems via APIs.

Its latest backed venture Percent offers users a card-linked app which they will use to ensure a donation goes through on purchases they make with retailers partnered with Percent – these largely include food outlets at present such as Nandos, All Bar One, Itsu, KFC and Five Guys.

The good causes or charitable funds can be anything from supporting disabled people’s transition to the UK workforce to funding breast cancer research to helping local mental health charities keep running.

“For more than two decades we have given at least one percent of our pre-tax profits to good causes,” says Nationwide’s CEO Tony Prestedge.

“As a member owned organisation, we are always looking for ways that our 15 million members can help direct funds to causes that they care about and support their local communities.”

Percent confirms it has signed “more than 1000” retail brands so far, and says its target audience is students and young people.

The 2017-founded start-up claims “tens of thousands of users” and reveals its intentions to become a nationwide phenomenon by 2020, with plans to go international in the pipeline.