Albo, the Mexican neobank which is currently offering users $50 to open an account, has raised $19 million in a Series A funding round extension. Following a $7.4 million round at the beginning of 2019, Albo has now raised a $26.4 million total Series A.

Offering a Mastercard debit card and a personal finance app, the neobank’s 31-year-old founder Angel Sahagun tells TechCrunch he wants to address those who lack access to deep financial products which are especially designed to help manage their wealth through lending and savings. 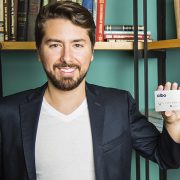 Sahagun says this market covers 59 million people just in Mexico. Currently boasting 200,000 monthly active customers, Albo will have to face up to some competition in Mexico’s wider challenger space. Whilst Brazil’s Nubank edged in on Mexico’s market in May, fellow Mexican neobank Flink just landed its seed funding this week too. This is in addition to European challengers N26 and Revolut which are expanding rapidly.

Latin American and US-focused investor Mountain Nazca also participated in the round, alongside Chime and Tandem-backer Flourish Ventures.

The challenger bank’s new funding shadows the $57.5 million raise in September by neobank Klar, dubbed the ‘Chime of Mexico’, which set the record for the largest fintech seed round in Mexico’s history.

Mexico, which has long been known to house a severely underbanked population, has seen a rapid mobilisation in efforts to make the region more fintech-friendly.

Last year legislation was passed by Mexico’s government which was designed to regulate fintech in order to boost its presence in the region, and just a few months ago the country’s central bank launched a smartphone payment system called CoDi to reduce cash payments.

This recent regulatory involvement across the country is what prompted McKinsey’s senior partner Carlos Trascasa to say on a panel at Sibos in London that there will now be a “leap frog” in Latin America’s digital transformation progress.