Mobile-first broker Freetrade has launched its new investment platform giving UK investors regulated access to buy UK and US stocks in FTSE 100 companies like Greggs and Amazon, as well as a variety of exchange-traded funds (ETFs). 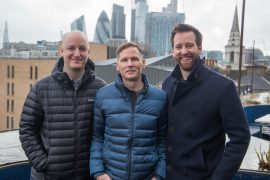 Unlike Revolut but much like Robinhood, Freetrade now owns the full stack right down to clearing which means its pricing is no longer controlled by third-parties. “To get to that position is not a small undertaking,” says Fuller, highlighting the “full access” it can now offer UK investors to their own market without hidden fees.

The start-up says it doesn’t make money on trade volumes or people’s data, rather its revenue comes from customers paying for certain investment products like an ISA account, or what Fuller says is still in development: the ‘pro-plan’. Basic investing accounts are free.

The 57-person start-up team is made up of largely technical minds and has a brokerage division in-house. “Some people use the ‘fintech’ term quite loosely when actually they’re just sitting on top of other company’s products,” says Fuller.

Next year the team is hoping to introduce fractional stocks, which will allow smaller-time investors to buy stocks in larger companies.

It’s also looking at an ‘auto-pilot’ feature which would automatically funnel money into different accounts for you and integrate with customers’ banks so they can see their investments in their banking app. “We want people to go to the Freetrade app, but if you’re looking at your savings app it would be nice to see how much you’ve invested,” says Fuller.

Going live in April this year with its initial offering which depended on third parties, the start-up says it is now seeing 12% week-on-week growth, has accrued 65,000 customers through its Know Your Customer (KYC) onboarding process and is already handling tens of millions in asset management.

There are currently wait lists for Freetrade’s platform in Germany, the Netherlands, Ireland and France

Finishing a $15 million funding round last month which was led by N26, Revolut and Transferwise-backer Draper Esprit, the focus for the start-up is now on hiring according to Fuller. “Hiring in London is very difficult, so we’ve got a few job posts going in the Netherlands too,” he says.

Asked what age group the start-up is trying to tap, Fuller says “it’s about what a person does, not what their age is”. He says that although customers in their thirties dominate Freetrade’s customer base, there are customers in their seventies using the platform.

The company’s end goal is to get everyone investing, but Fuller admits that “right now you need to have a real intent to invest and understand investing” to use Freetrade’s platform.

There are currently wait lists for Freetrade’s platform in Germany, the Netherlands, Ireland and France. Fuller confirms the hope is to eventually roll out into wider Europe too.