Harlem Capital has upgraded from angel syndicate to full-fledged venture capital fund, closing its debut effort on an oversubscribed $40.3 million, according to TechCrunch.

The firm was launched by managing partners Henri Pierre-Jacques and Jarrid Tingle in New York City’s Harlem neighbourhood in 2015. 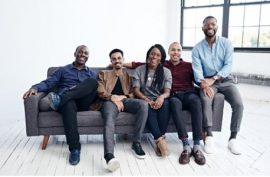 Harlem Capital becomes one of the largest venture capital funds with a diversity mandate.

The pair have since graduated from Harvard Business School and hired two venture partners, Brandon Bryant and John Henry, and two senior associates to help expand their portfolio. The over-arching goal: invest in 1,000 diverse founders over the next 20 years.

“We fundamentally believe we are a venture fund with impact, not an impact fund,” Pierre-Jacques tells TechCrunch. “The way we generate impact is to give women and minority entrepreneurs ownership.”

Capital from Harlem Capital Partners Venture Fund I, an industry-agnostic vehicle that invests in post-revenue businesses across the US, will be used to lead, co-lead or participate in $250,000 to $1 million-sized seed or Series A finance.

With its first fund close, Harlem Capital becomes one of the largest venture capital funds with a diversity mandate.

Despite an increasing amount of punishing data exposing the gender and race gap in venture capital, minority founders continue to rake in just a small percentage of funding each year.

According to a RateMyInvestor and Diversity VC report released earlier this year, most VC dollars are invested in companies run by white men with a university degree. Other recent data indicates startups founded exclusively by women raised just 2.2% of overall VC funding in 2018, with numbers on pace to increase only slightly in 2019. Meanwhile, the median amount of funding raised by black female founders, as of 2018, was $0.

The stark contrast in funding for female versus male entrepreneurs or white women versus black women founders is in part a result of a lack of diversity amongst general partners at venture capital funds and amongst the limited partners that choose which venture capital funds to provide capital. While there’s little data available on diversity of LPs, 81% of VC firms didn’t have a single black investor as of 2018.

Related: Being black in the financial services industry

“There’s no rational reason why this problem exists,” Tingle tells TechCrunch. “It persists because VC funds in general have been closely held and clustered around Silicon Valley. They come from particular schools with particular networks with a small head count that doesn’t turn over frequently. Some firms have strategically added a few partners here and there, but not enough to change the organisation. You need diversity funds like us to get this market anywhere close to parity.”

“A lot of investors are frankly missing out on opportunities,” Tingle adds.

Having met through the Management Leadership for Tomorrow Program, a nonprofit organisation identifying a new generation of leadership, Tingle and Pierre-Jacques have built a prolific internship program at the firm. With as many as six interns admitted each quarter, the goal is to train future investors of color.