Kossoras says its essential that banks learn how to “harness the explosion of unstructured data”, that is: data which is not pre-defined or organised. 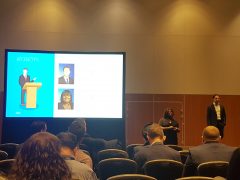 In the context of a looming 2021 deadline which will see banks totally rethink interest calculations on every transaction as they move away from the London Interbank Offered Rate (Libor), it’s of growing importance that banks become more digitally-literate to tackle this data-heavy transition.

But with 90% of data in financial organisations now unstructured, Kossoras finds it “scary” that 80% of people in banking don’t know what this unstructured data actually is or how to get hold of it.

“That is scary, and it’s really board-level scary too,” says Kossoras who points out that executive board members for banks are making decisions with little knowledge on data.

But whilst bank boards will “never spend on a ‘pointless’ data harvesting strategy”, Kossoras says they will look at a “use case-driven” approach which points to investment generation, or highlights real problems such as reputational risk or a multi-million pound fine.

Not only is the “sheer quantum” of unstructured data intimidating, Kossoras also says that low digital literacy in banks means that although the technology is ready, the corporate world is not equipped with the right type of capability to use it to analyse and digest the said data.

Fellow KPMG partner for FS intelligent automation Dinah Cobbinah says the definition of a data project “is often [set] too loose”, which means she’s “found clients floundering trying to pick up different elements” without having a structured plan or key selling points for stake holders.

Admitting there is a “significant” amount of data to get your arms around when it comes to the move away from Libor for banks, Cobbinah is clear that the automation banks will inevitably use to broach the transition does not have to replace people and incur thousands of job losses like we’ve seen at the likes of Deustche Bank.

“All of us here are intelligent people and add value to the organisation we work in,” says Cobbinah, who rules that “when we talk about AI we can’t remove ourselves from it.”

Kossoras cites Goldman Sach’s hiring spree of more than 100 coders on its trading floor, which was announced in August this year and saw Bloomberg dub it as “a sign of where Wall Street is headed”.

The need to have data literacy “integrated into the line of control” as opposed to tagged on in a separate digital entity should be right at the top of banks’ agendas going into 2020 in Kossoras’ opinion.

Read next: Legal & General outsources more of its investment arm to Charles River