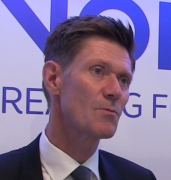 “The Nordics offer the perfect playground for experimentation.”

Fast-becoming the kings of collaboration, the Nordics are trailblazing their way to a cross-border payments haven. Backed by Nordea and five other Nordic banks, the formation of P27 – a single payments platform designed to process 27 million people’s transactions across the region – will see Nordic firms doing more business than ever with their next-door neighbours.

Nordea’s head of transaction banking, Erik Zingmark, told FinTech Futures that the European continent is moving in the same direction too with TIPS and with payment initiation service providers (PISPs). But instead of P27 competing with PISPs, the Swedish bank’s exec says: “We have no time to wait for a continental solution that probably won’t focus on the Nordic currencies in the first round.”

With the already-intensive nature of intro-Nordic trade, Zingmark points out the Nordic countries “are each other’s main counterparts”. So whilst trade with the rest of Europe, Asia and the US is important to them, these geo-trade links don’t necessarily help the smaller regional businesses.

But that doesn’t mean the other trade leaders aren’t taking notice. “There is a great interest internationally for what is going on here,” says Zingmark. “If you’re a fintech, this a great environment to try out your business model in – since it’s multi-currency and multi-country”.

In an era of Samsung, Google and Apple global wallets, as well as local e-wallet alternatives such as the Swedish Swish, e-commerce is offering more opportunities for Nordea. With a very high penetration on using cards and mobile payments, the Nordics offer the perfect playground for experimentation. But when it comes to bringing domestic e-wallets abroad, Zingmark identifies some of the road blocks.

“I’m not sure that the western population is ready, culturally, to embrace the way that financial services are managed in Asia,” says Nordea’s exec when asked about the likes of Alipay and WeChat. Just as Swish would struggle if it tried to enter another continent, Zingmark notes that Asia’s global wallets would also struggle – largely because the alternative domestic solutions are already so advanced. “It’s not very easy to come and conquer here, but you should never say never,” says Zingmark.

As well as replacing its legacy systems, Nordea is changing its core operations on a human side, working on “the mindset, competence and intangible sides like culture and people”. In Australia, regulators are now asking for annual reports on company culture, but Zingmark says “culture should already be implicitly regulated through company’s internal compliance training”.

No reg no tech

As well as being an advocate for AI, APIs and open banking, Nordea is also a co-founder of blockchain based solution WeTrade, and a participant in blockchain initiatives run by the Finnish government in real estate trading. But the bank is more conservative around the topic of cryprocurrencies.

“If the central bank and government don’t have the strong tools to impact the economy, you are completely blinded as a country,” says Zingmark on the topic of Libra. “I think that there is a lack of understanding around how macro economies actually work,” he continues, suggesting advocates of decentralised payments haven’t really thought it through.