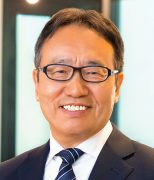 SoftBank is expected to complete the merger in October 2020, according to Asian news site Nikkei, in a bid to better position itself against competitors such as local rival Rakuten and US bigtech firms.

SoftBank and Naver will each hold 50% of a new holding company which will operate Line and Z Holdings.

“In the Internet market, overseas companies, especially those based in the United States and China, are overwhelmingly dominant, and even when comparing the size of operations, there is currently a big difference between such overseas companies and those in other Asian countries, other than China,” says SoftBank in a statement.

Read next: Japan’s elderly fight back against cashless wave

Line has struggled to reach past its successful native market dominance in Japan, Taiwan and Thailand, just as Yahoo Japan is one of the country’s biggest search engines but has to compete with Google globally.

The merger also offers SoftBank access to 164 million Line users and their data across Japan and Southeast Asia.

In return Line may get access to the giant Vision Fund, which has invested in the likes of Uber and WeWork but has consequently gathered broad criticism after SoftBank had to buy-out these two unprofitable technology start-ups.