MoneyLive 2019: Banks have to be humble even if they’re everywhere, says ING exec

ING’s chief innovation officer (CIO) Benoît Legrand says “we [banks] should not be that visible – yes we have to be everywhere in the economy, but we also have to be humble”.

Prioritising humility in his approach to innovation, Legrand feels banks should always be seamlessly embedded into people’s routines so as to go unnoticed, despite the more involved they become through the advent of fintech and third party integrations. 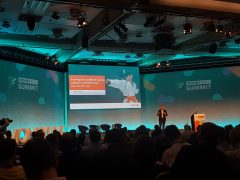 The ING executive notes banks’ tendencies to over-promise to customers through their adverts. “You’re making things worse”, says Legrand in an interview with FinTech Futures at MoneyLive Summit.

“If you do not experience this [what the advert promises] as a customer in your daily life, to say it makes it even worse” because it magnifies your [the banks’] shortfalls.

Instead of shouting about new technology and product development, Legrand believes it’s high time banks revolve around the customer, however exhausted the message sounds because ultimately “we [banks] are in the service industry”.

“Banks have for too long been arrogant and have thought they don’t need to change”.

Despite going against the nature of human beings, a nature which leans heavily towards stability, ING’s CIO stresses the need to always change with the customer. “It sounds like a cliche but it is really hard”.

“All the banks say the same thing but the difference is who’s actually making things happen,” says Legrand, who also heads up ING Ventures which sits on €300 million in capital for fintech start-ups.

As head of the bank’s venture arm, Legrand reveals the bank is now partnering with 27 different fintechs, having invested €230 million so far.

And as CIO, he has trained 6,000 out of the investment bank’s total 56,000 employees to understand innovation as a mindset amid the walls of what the bank calls its ‘Centres of Excellence’ – an ING conception set up five years ago.

In other words, the executive is changing their mentalities so that internal culture “evolves into a way [of thinking] where we [the banks] do not know better”. Legrand anticipates this could take 10 years to fully implement with all employees.

Asked to summaries what innovation ultimately means to ING, Legrand says: “For us, it’s basically a mindset of transforming ourselves which we need to build. Our ultimate goal is to no longer have any innovation because it will be so built into organisation that we don’t need it as a separate concept.”