“I’m sorry to say Hungary is behind everyone,” when it comes to digital developments in banking, according to an executive from CMS, the law firm helping the National Bank of Hungary (MNB) write and implement its fintech strategy.

CMS executive: “Hungarians do not use sophisticated fintech apps”

But different from Hungary’s National Fintech Strategy, the MNB’s guidelines offer a more precise roadmap of 24 concrete proposals and initiatives in order “to speed things up”.

Hungary, although one of the first in the Central and Eastern European (CEE) region to publish such a document, is still very much behind its neighbours Romania, Poland and Czech Republic when it comes to digitisation.

Managing partner and banking and international finance head at CMS, Erika Papp, tells FinTech Futures that: “Hungarians do not use sophisticated fintech apps. They are really behind where Europe is […] Hungarians still love to walk into branches and do banking personally.”

The law firm’s research on Hungary with Deloitte found that there was a “long break and then Hungary” when it came to its operational costs and digital maturity across 2018.

“Hungary is overbanked, and so it is heavy to move so many banks,” says Papp. “In order to give an expedited licencing to fintech companies across the country, the MNB has recognised the licensing process needs to be reviewed and sped up.”

The bank’s aim is to create “a space for newly-established fintech companies to have a temporary permission to operate in Hungary,” according to Papp.

As well as accelerating the licensing process so fintechs can get to market quicker in the region, the bank also wants to improve the level of financial education across the country.

“The MNB would like to change the Hungarian mindset,” says Papp, who is a lecturer in one of the legal academies for the MNB.

The national bank will develop closer relationships with universities, and publish official digital transformation recommendations which will then be adopted into personalised plans for all of Hungary’s banks. 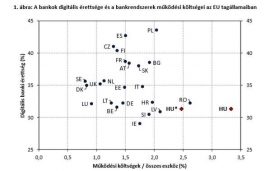 When asked what the fintech scene is like in Hungary, Papp says there is a group of small banking sector companies, but overall “there is not much going on”.

Especially at a local market level “there is very little movement”.

Initially, the bank hopes to attract instant payments and digital identification fintechs, as described by Papp as “the two most required”.

Whilst Papp says “it’s very exciting to be in Hungary at this time with the national bank being so active,” she also recognises the predicament Hungarian banks are facing at this digital transformation crossroad.

“It’s a Catch 22,” says Papp. If banks lose the branch, they lose customers. If the branch stays, customers will be put off by digital, so it’s a case of “who is going to make the first move?”.