Banks aren’t going away any time soon, according to a zeitgeist-busting industry panel, but the models through which they interact with their customers must undergo some fundamental changes over the next dozen years. 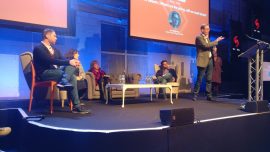 For Josh Bottomley, global head of a digital at HSBC, the fundamental drivers that necessitate banks are very specific and the need for banks at a macro level is clear. “If you go back to a society without banks, people cannot borrow or lend money. You would be unable to start a business at all [without cash up front]”.

Bottomley adds that some of the functions that banks provide – including counter terrorism financing (CFT) and anti-money laundering (AML) – are completely separate from the debate over whether a financial institution has fancy front-facing technology. The need for those functions alone requires the existence of banks, he says.

Russell Pert, industry lead for financial services at Facebook, says that the purpose of banks has not really changed since ancient times. “What has changed is how they’re servicing customers. The need now to be a more relevant bank creates a profound challenge. We spend three hours a day on average on our mobile phone […] we look at our phones 80 times a day. We scroll through 300 feet of news-feeds every day […] The need for us to communicate in a more relevant way is critical.”

Pert says that we will without a doubt see banks operating successfully in the future if they can serve their customers through the right channels and with the right choices.

Ceri Godwin, director for growth and advisory- emtech at Santander UK, adds that a number of buzzwords have begun to crop up around the industry.

“Interoperability is one,” she says. “Banking is the greatest interoperable network in the world. That’s happened over time and it’s a huge infrastructure that support everybody in their day to day lives and it isn’t one to be dismissed. You can trust your bank. Banks have to operate with a licence and an eye-wateringly comprehensive framework. It gives us a certain mindset. Bankers do think differently due to that regulated mindset.”

“Disruption in banking is transactional, it’s about microservices and not about wholesale change and a killer app.”

Founder and CEO of Dozens, Aritra Chakravarty, argues that banks need to refocus on serving their customers properly. “If banks are meant to be fiduciaries, why do they make more money when you borrow? This is not there in any other industry. It’s like a car manufacturer making more money as accidents go up. Their existence depends on borrowing. Why is it easier for me to borrow to buy a bathtub than it is to start a business? We’re not lending to the right aspects of society. All of this might make sense with one basic argument: that banks are not there to serve their customers.”

For Anne Boden, CEO of Starling Bank, if there were no need for banks anymore then everyone would immediately go and close their bank accounts. She adds that we all need banks, but banks need to evolve. “We have a new movement of banks coming to market to address customer needs but the new banks – as opposed to fintechs – have a path to profitability. Unfortunately, a lot of them are not banks and don’t have a way of generating revenue. Despite the fact they are disrupting and bringing new innovation they do not have a long-term profitability plans and therefore will not be around in 10 years of 100 years’ time.”