Eileen Burbidge steps down as chair of digital bank Tide

One of London’s influential tech investors has stepped down as chair of the small and medium sized (SME) business bank Tide, kicking off the hunt for a replacement, according to The Telegraph. 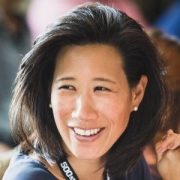 Burbidge steps down from role at Tide.

Eileen Burbidge, founding partner at Passion Capital and chair of lobby group Tech Nation, gave up her role at Tide following a funding round.

The departure last month leaves the bank hunting for an independent chair as it has not yet appointed head-hunters, according to the newspaper. A replacement is not expected to be installed until 2020.

“It’s been a privilege to have been chair since the company was founded. It was never the intention for me to be a long-term chair, given it is best practice for an independent director to fulfil that role as soon as the company started scaling,” says Burbidge.

Burbidge is also a director and early investor in Monzo, although Tide said there had been no conflict of interest.

Passion and Creandum remain significant shareholders in Tide but have been relegated to board observers.

Burbidge was closely involved in the launch of Tide, co-signing its incorporation documents with founder George Bevis. Bevis stepped back from running the company in March 2018 and Burbidge took on day-to-day running in the interim as it sought a new boss. Tide appointed Oliver Prill as chief executive in August that year.

“All board changes and the appointment of a non-executive Chair have been long planned and agreed as a natural evolution as the company scales,” says Prill.

The start-up bank has expanded rapidly, taking on £44m from new investors Augmentum and Japan’s SBI Group in October and has around 2% of the small business banking market, according to The Telegraph.