HSBC’s head of technology and cyber risk Rory Alsop tells FinTech Futures “the improvement only comes as they retire,” talking about the issue of gender diversity on banking boards which often sees them populated with older white males.

This comes down to Alsop’s own morals on the subject of diversity, which is: “how do we get people not like us in?”

Not shying away from the fact that he too is an 56-year-old white male, Alsop shares his own efforts so far in redressing the gender imbalance in financial institutions (FIs) at Cybersecurity Connect UK 2019 in Monaco. 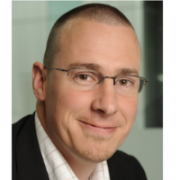 Alsop: “What puts girls off is firstly boys trying to make it a boys club”

With a 13-year-old daughter who he often takes to cybersecurity conferences, Alsop understands first-hand the importance of getting young women involved in technology.

“What puts girls off is firstly boys trying to make it a boys club which means visibility is all middle-aged white males,” says Alsop, “and secondly, we’re still way off parity with the numbers [of men to women on boards]”.

The percentage of women in leadership positions on the UK’s FTSE 100 boards flatlined for a fourth year last year at 9.7% according to Cranfield University research. UK banks such as HSBC, Lloyds, Royal Bank of Scotland (RBS), Standard Chartered and Barclays are all in the FTSE index.

“We [the industry] want to double diversity in Scottish [financial services],” says Alsop, who does school outreach in Edinburgh where he lives.

With Scotland IS, the trade association for the country’s digital technologies industry, Alsop and others reach more than 4,000 kids a year in a bid to disrupt the uneven gender split across banking.

This outreach goes all the way up to university: “If we can work with faculty leads and see fourth years’ presentations, then we can spot the good ones early on and coach them to reach these positions”.

When asked how he thinks gender diversity will impact financial sectors such as cybersecurity, Alsop replies simply: “If you have a diverse workforce, you will be more profitable”.

This came to light in a 2015 McKinsey report, which revealed companies in the top quartile for racial and ethnic diversity are 35% more likely to have financial returns above their respective national industry medians.

So at the board level, it should be an easy sell. But Alsop says this isn’t always the case. “Boards can be rigid,” he says, noting that they can sometimes think of it as hiring ‘for the sake of diversity’.

Brushing this attitude away as a very ill-informed one, Alsop also addresses the point of decision held by human relations (HR) teams.

“HR is always difficult in large corporates because they have so many applicants,” says Alsop, who thinks it’s important “to educate HR teams on not necessarily looking for certifications as a measurement of something”.

Instead, Alsop concludes that they should look for what candidates do – and a lot of this insight comes from university and school visits, rather than just judging from single sheets of paper.