CaixaBank has opened in Barcelona what its calling “the largest financial experience hub in Europe” to “revolutionise” the physical service channel channels of customer experience.

The Bauhaus-style three-floor building situated in Francesc Macià square has everything from ATMs with facial recognition to Michelin star chefs to mobile self check-in machines and audiovisual scenes of rural landscapes for customers on arrival.

The bank wants its customers to feel like they’ve arrived “at an urban oasis”. 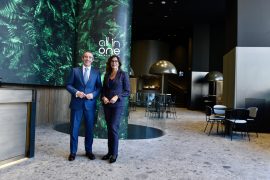 Bringing together a team of 80 advisers specialising in various areas of banking, the space will provide “specialised attention” to 22,000 of the Spanish bank’s customers.

With an auditorium and more than 30 private meeting spaces, the “all in one” branded Barcelona hub was open to the bank’s customers as of the 6 November 2019.

Customers and non-customers living in Barcelona will also have access to a monthly programme offering discussions, lectures and roundtables “on all topics of interest”.

The focus on physical channels makes sense for the bank’s chief business officer Juan Antonio Alcaraz, who points out CaixaBank was the first company to begin the transformation of traditional bank branches in 2013 by designing the store branch, which he says over the years became the standard for the entire sector.

“We have united design, technology and customer knowledge to create an absolutely exclusive model,” says Alcaraz.

Calling the hub a point of convergence for businesses rather than a branch, the bank’s territorial director in Barcelona María Alsina says the “all in one” space will “be open to the entire city” and “at the service of Barcelona”, as well as CaixaBank’s customers.

“All in one” Barcelona is the second of CaixaBank’s new model of spaces, following the opening of “all in one” Valencia in July, in a 2,200-square-metre space located in City Hall Plaza.