Barclays has released a new and improved version of its finger vein scanner for business customers in partnership with Japanese multinational conglomerate Hitachi. 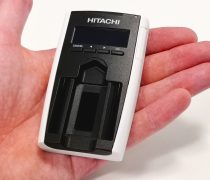 The banks says its 2.0 model gives businesses access to their banking data more securely and still in seconds.

Dubbed the ‘Barclays Biometric Reader’ (BBR), the new handset – smaller than its predecessor – uses infra-red technology to scan individual finger vein patterns which the bank says is “more secure than a fingerprint”. Also known as Hitachi’s VeinID, Barclays was the first in the UK to adopt it in September.

The new handset is smaller than its predecessor, pictured above

“Our clients are increasingly mobile and the advances we’ve been able to introduce will allow them to securely manage their accounts wherever they are.”

In a bid to eliminate the risks of PIN capture, identity fraud or account detail sharing, the bank is also introducing a ‘Sign What You See’ (SWYS) activity screen which displays written instructions describing the activity being authorised.

This addition supposedly reduces the risk of fraud if a computer is compromised or if someone manipulates the details of the activity authorisation details needed.

As well as this, the bank is giving business customers Bluetooth connectivity access so they don’t have to physically connect a scanner to their computer when uploading documents.

Barclays’ digital banking system iPortal “fully interact[s]” with the BBR, mean corporate and business banking customers which use Barclays.Net and iPortal will get access to the new product from early 2020.