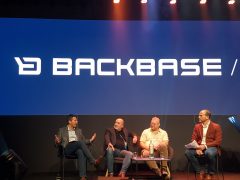 This week FinTech Futures attended Backbase Connect 2019 in Amsterdam. The conference brought together its established bank customers from Europe, Asia, Africa and North America, highlighting the need for banks to fully embrace digital transformation if they want to survive what the CEO Jouk Pleiter dubs the “neo-reality” we’re now living in.

Backbase acts as a digital bank enabler, providing long-standing banks with out-of-the-box solutions such as banking app templates and architecture integrators which mean these financial institutions can deploy much quicker to compete with the neobanks of the world.

Here is a full round-up of the trends and key takeaways mentioned throughout the week:

You don’t need to spend €20 billion to compete

Banco Santander announced in April 2019 that it was spending €20 billion to move to a multi-cloud environment and integrate machine learning in a bid to slash €1.2 billion in annual costs.

But Backbase’s CEO doesn’t understand what’s behind this spend: “I really do not know how you spend that much money on digital transformation.” In Pleiter’s eyes, the most important thing is banks being open and “willing” as financial institutions to make digital change – this approach has no price tag. 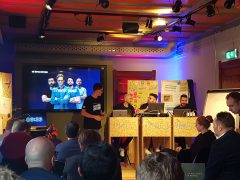 Backbase can build a mobile-first bank in 47 minutes

Already equipped with a banking licence, the dev ops team were able to go from an uncustomised template to a fully-customised, integrated banking app capable of bank transactions with 13 minutes to spare at the end for a demo.

Despite the likes of Revolut saying you need to have a start-up spirit to achieve these sorts of feats, Backbases’ global director of solution engineering, Robin Bultot is confident “everyone can do it”, referring to banks such as Royal Bank of Scotland (RBS) and HSBC who have created dedicated, smaller teams and are “already doing it”.

It’s too expensive to run, the set-up is too fragmented and it’s fundamentally not designed to be a platform, says CEO Pleiter.

“You need to move to a central platform” to survive he says, “to compete, we have to go to a platform-centric model”. 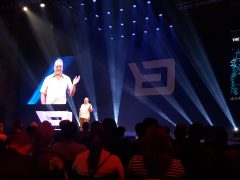 “The tech should come later”

When asking firms labelling themselves as “a blockchain company” what they do, former CIO of Singapore’s DBS Bank Neal Cross finds the firms’ execs nearly always say “cross-border payments”.

For Cross there is a disconnect here because the technology is coming before the need for it in the first place, which in this case is delivering customer global payments. “This is a red alert for the industry,” says Cross who feels start-ups need to find the right problem but are too good at finding the wrong one entirely.

Pleiter also points this out from a people count perspective in banks and neobanks, where we’re seeing banks lay off thousands as the likes of Revolut plans to hire thousands.

Apps “are the foundation of our future business”

Asking the audience whether it can afford not to become a preferred app, Pleiter says no. The app space is “the real battle ground”, he says.

Backbase’s entire product revolves around the mobile banking app. It’s one-hour mobile-first bank build demoed an app which sits on an AWS cloud infrastructure, uses Mambu as a system of record and Salt Edge for categorisation of transactions and payments.

The ‘North Star’ of your company should always be human

Amidst all this digital change, Pleiter truly believes in a ‘North Star’ approach – in other words, a constant amid all that is moving. 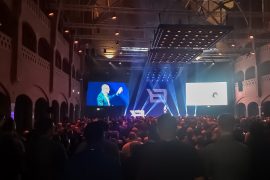 “Are these guys [banks] going to really make the change or are we entering into a massive classic IT project,” says Pleiter on what he weighs up when embarking on a new partnership with a customer.

“It’s super important for traditional banks to fight back,” Pleiter stresses, pointing out that the dream of signing a contract for Backbase to make a bank ‘go digital’ is often hit by the reality: “One day you [the bank] need to go to the gym yourself to get fit”.

Successful digital transformation depends on the “willingness of the banks” to undergo it on their side too.