AI assistant fintech Plum has raised $3 million in funding, on top of the $4.5 million it gained this summer, putting its funding total at $9.3 million since its founding in 2016. 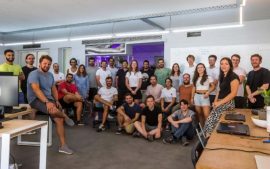 The UK start-up analyses incomings and outgoings of its users and automatically sets small “safe” amounts of money aside to help them save.

The funding, which will be used to grow the fintech’s product in Europe, was led by existing investors the European Bank for Reconstruction and Development (EBRD) and Athens-based venture fund VentureFriends, and saw participation from new backer Christian Faes – founder and CEO of UK non-bank mortgage lender LendInvest.

Founded by ex-TransferWise head of international banking Victor Trokoudes, Plum now has a team of 31 spread across Athens and London.

“Until now we have been focused on the UK but the Brits are not the only people who are struggling to save and grow their money,” says Plum’s CEO and co-founder Victor Trokoudes.

“Our sights are firmly set on Europe; in Spain, for example, a quarter of the population don’t have any savings at all.”

Trokoudes reveals the start-up has hired a behavioural scientist to ensure its products going forward are “informed by actual human behaviour rather than industry assumptions”.

The newly-funded fintech recently released the 52 Week Challenge which it says can help users save £1367 over a year, and the Rainy Day Rule which puts aside money when it rains.

The app will also perform automated round-ups, which Plum says boosts its users savings by 50% on average.