Digital bank for small and medium-sized enterprises (SMEs) Tide has bagged a new investment from Strategic Business Innovator (SBI) investment, a subsidiary of Tokyo-based SBI Holdings who released the news on its website on 7 October. 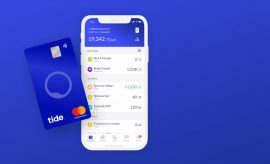 Although the press release does not have a specific amount, The Telegraph states that the Japanese investment giant splashed £44 million on the British fintech, valuing the challenger bank at £200 million as it “prepares for a major hiring spree”. The investment was made through the SBI artificial intelligence (AI) and blockchain fund (SBI A&B Fund).

Growing to more than 150 employees and 100,000 members since it founded in 2016, Tide released its first paid plan called ‘Tide Plus’ last month, offering SMEs working hour phone support, a 24 hour legal helpline and 20 free transfers a month for £11.99 a month.

With 120 companies contributing capital to SBI’s A&B Fund, this gives Tide the opportunity to introduce its service to 120 new customers, both from Japan and around the world. This model enables investees to engage in open innovation and raises the value of their own companies, whilst Tide benefits from the global recognition and growth.