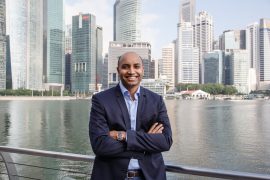 In an announcement at Money 20/20 in Las Vegas, the company said it’s been gearing up for the transformation since its $41 million funding round earlier this year, which it dubs as one of the largest fintech funds raised in Southeast Asian history.

Whilst the firm will remain a digital remittance solution, the move to become Nium is part of the fintech’s plan “to create a world of ‘open money’ where everyone’s money is free for them to use”. The word ‘Nium’ is derived from the Sanskrit word for rules and principles, says its CEO.

“As we look to the future, our strategy is to move beyond merely creating services on our own proprietary platform,” says Nium’s CEO Prajit Nanu.

“We aspire to become enablers; creators of an open platform that businesses and partners use to build a world free of old constraints and restrictions – a true world of open money. This is Nium,” Nanu adds.

The reborn company says nothing like its ‘open money network’, which aims to become a digital collective of financial institutions, has ever been created before.

As well as using the new and improved platform for money transfer services abroad, Nium customers can also use it as a space to develop new products – almost acting as a type of innovation hub with the aim to “free [financial institutions] from legacy system constraints”.

Founded in 2014, Nium is a graduate of Visa’s fintech fast-track programme. Nanu says the fintech has continued to work hard since then to “open a world of possibilities in the global payments universe”.

Read next: MoneyGram hits back at consumers and investors