PayExpo 2019: Monzo COO not so sure it needed to be a bank for its success

Challenger bank Monzo’s COO, Tom Foster-Carter, has said he’s “not so sure” the company needed to be a bank for its success, after saying its processes have been expensive, slow and heavy since securing its licence in 2017. 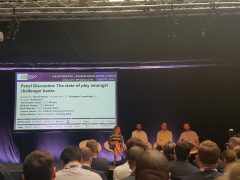 Foster-Carter says the fintech started out with the “strong hypothesis” that it needed to be a bank, but two years on the exec is questioning whether the challenger’s bank-first approach was the right one. With a tech-first mindset, it seemed to the audience at PayExpo London that the exec feels the company has drifted from the initial agility it was founded upon.

Also on the conference panel was Revolut’s COO, Richard Davies, and challenger bank Tandem’s COO, Nick Bennett, who conversely thought it was important for their companies to be banks. Bennett went as far as to say people still have trust in banks, which is why the badge of approval is still important for newcomers.

This certainly seems the case when you look at how customers use challengers, which is largely or wholly for day-to-day transactions rather than bigger, monthly installments such as salaries.

But the challengers aren’t worried about this. Davies says Revolut is “happy with that”. When the fintech looks at the larger data share of transactions, it holds 55-60% of it.

Read more: Revolut’s losses double to £33m as it gears up to hire staff, expand reach

Tandem’s COO says salaries will be going into challenger accounts in two years. “If you look two years back, people were saying challengers wouldn’t get any customers. Now, it’s a different story.”

On whether the challengers were worried about the deep pockets of traditional banks for innovation, Davies is sure that, “there is no way they can execute it even if they have the money”. His reason is that, “there’s a huge amount of blood, sweat and tears that goes into this. If you’re on a corporate salary with a healthy pension, where’s the motivation? There’s no human factor like there is in start-ups”.

The challengers finished up the discussion by talking about their future growth plans. Whilst Revolut’s plans made headlines last week, taking on 3,500 new staff members and expand into eight new markets by the end of this year, Monzo revealed its strategy is to become “one of the top five banks in the UK in three years time”.

Unlike Tandem, which is focusing on the Western European markets, Monzo will also look to the US, with another market to be confirmed soon.

Read on: Challenger bank Bunq launches in UK and 21 other European countries