PayExpo 2019: Europe will catch the UK’s open banking lead up in a year, says Danske Bank

Danske Bank says the UK’s lead in open banking won’t last much longer, predicting countries like France and Germany will “catch up and go beyond in just a year’s time”. 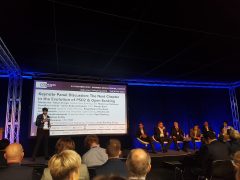 The bank’s CDO, Søren Rode Andreasen, told a PayExpo panel in London that he sees wider Europe jumping on the open banking bandwagon, fueling competition which may even overshadow the traditional industry leader – the UK.

Andreasen reasons that the UK is a mature market, whereas the rest of Europe, is “a little more rough and ready” and can offer a landscape for more unique business models to succeed.

Fellow panelists weren’t so sure of his one-year timeline though. Yolt’s CEO, Frank Jan Risseeuw, says processes such as the documentation of application program interfaces (APIs) are simply not up to scratch in the rest of Europe to facilitate this jump.

There was consensus on additional factors the UK can apply with open banking. All six panelists, including Lloyds, Royal Bank of Scotland (RBS) and Mastercard say that the UK “is not quite there yet”.

With the dawn of the Revised Payment Service Directive (PSD2), which allows consumers and businesses to use third-party providers to manage their finances, Gulamhuseinwala feels like the open banking movement is now truly “principle-driven”. “If that doesn’t feel like a European project, then I don’t know what does,” he says.

On the topic of fintech partnerships, RBS’ head of open banking, Dan Globerson, gives the capabilities of open banking a glowing report, revealing that the bank is now looking at its 12th proposal internally on the use of APIs. He says the technology has hugely helped the financial institution with pre-approved lending and cash flow for small and medium businesses (SMBs).