Nine British-based fintechs have been sent to Australia as part of the two countries’ ‘FinTech Bridge’ agreement, which will see the companies showcased at Melbourne’s Intersekt conference this week before undergoing a series of meetings and events in Sydney. 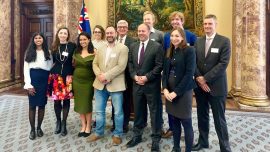 Nine UK fintechs with Treasurer of Australia and Deputy Leader of the Liberal Party, Josh Frydenberg, in London in June

All the companies will be exploring potential partnerships in the Australian market, just as 10 Australian fintechs did on a similar visit programme to the UK last month.

Launched by the UK Investment Minister, Graham Stuart, during UK Fintech Week in April this year and facilitated by the UK’s and Australia’s Departments for International Trade (DITs), the aim for the bilateral agreement is to accelerate expansion for fintechs between the two countries.

“It is great to see such a strong cohort of UK fintechs visiting Australia – it says a lot about the opportunities in this market and the potential to further build our two-way trade and investment links,” says British Consul General and UK Deputy Trade Commissioner for Asia Pacific-Australia and New Zealand, Michael Ward.

Since its inception, the programme has seen more than 24 Australian fintechs setting up in the UK, and more than 14 new UK fintechs doing business with Australia.

In 2018, there was approximately AUD 4.7 billion ($3.1bn) in investments sent to the UK fintech industry. This is more than all the European countries individually invested.