Digital small and medium enterprise (SME) lender Lidya is launching its platform in Poland and the Czech Republic, marking the Nigerian firm’s first international expansion into Europe since it was founded in 2016 in Lagos. 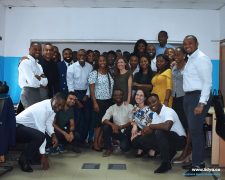 Lidya’s launch in the Central and Eastern European (CEE) region is being led by former CEO of Polish lender Idea Money, Tomasz Sekalski, and the former head of retail banking for ING Bank Czech Republic, Libor Vanicek. Sekalski and Vanicek will become country directors for Poland and the Czech Republic, respectively.

The company’s USP is to provide loans within 24 hours to SMEs and create 100 million jobs worldwide. To date, it’s raised nearly $10 million.

“Through Lidya, we have the opportunity to empower the growth of SMEs in Africa, Europe and around the world,” says Lidya’s co-founder, Ercin Eksin. “SMEs create the most number of jobs and significantly contribute to GDP. We are on a mission to support the creation of 100 million jobs in fast-growing economies.”

The fintech says it has issued more than 10,000 loans in Nigeria, and aims to become the largest lender in the country’s market for SMEs by the end of this year.

Fellow Lidya co-founder, Tunde Kehinde, says: “We are planning to disburse €1 billion to small businesses in Poland and the Czech Republic over the next five years”.

Founders Eksin and Kehinde come from the Nigeria-headquartered, Jumia, an e-commerce platform operating in 14 African countries in 2014. Jumia has now lost more than half of its value since going public six months ago.