India’s online payments service company Paytm is in talks with US asset manager T Rowe Price to lead a $1 billion funding round with a $150-200 million contribution. Existing investors, SoftBank and Ant Financial, are expected to make up the rest of the capital bulk. 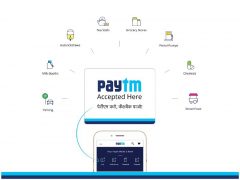 According to India’s Economic Times’ sources, the size of the funding round has now been “trimmed” from the $2 billion that Paytm’s parent company One97 Communication set out to raise. Bloomberg has not changed its report which quoted a $2 billion round.

This latest funding round is expected to see Paytm’s valuation rocket to as much as $15 billion.

Bloomberg’s sources added that US billionaire, Rob Citrone’s Discovery Capital Management, is also in discussions with Paytm to join the funding round.

Paytm’s founder, Vijay Shekhar Sharma, is raising the capital to fend off newer entrants into the Indian payments market, such as Facebook, Alphabet’s Google and Walmart-owned Flipkart’s PhonePe.

In just under a decade, Paytm has grown to India’s most recognisable payments name. This exponential growth was hugely helped by India’s government deciding to stop the circulation of paper money to tackle corruption in 2016. Within months, the company had hundreds of thousands of signups.

But, despite Credit Suisse projecting India’s digital payments market to reach $1 trillion by 2023, cash still accounts for 70% of all Indian transactions by value. And if the country does reach the 2023 projection, it will still be $4 trillion behind China’s mobile payments market.

This hasn’t put off Chinese investors though, with the likes of Ant Financial making money from the offshore revenue which gives the company a security blanket in the face of tighter regulations in China.

Read on: Challenger banks in India: who’s who and what’s their tech