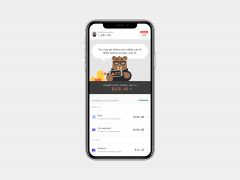 With 4 million users on its financial management app and a further 800,000 waiting in line to use it, the online banking platform says it saves each customer $500 on average with its overdraft protection service, which shows a total balance with direct debits are applied and offers up to $100 in interest-free overdraft protection.

As well as stopping customers from becoming overdrawn each month, the platform also offers money cushions between $50 to $75 to tie users over each month, as well as automatic budgeting tools.

“It’s one thing to help people with budgeting,” says co-founder Jason Wilk. “It’s another to actually manage their money.”

By drawing customers in with its financial management app, the start-up then uses this as a way in to disrupting the user’s bank providers.

“We can prove that Dave can be helpful by showing how we can help you manage your current account, and then Dave banking is the marketing lever from there,” says Wilk.

The investment will go towards the expansion of its product and engineering team over the next 12 months, to secure the success of its banking product.

For Wilk, Dave offers a useful, in-tune alternative. “People don’t need predatory fees, they need tools that actually solve their challenges around credit building, finding work and getting access to their own money to cover immediate expenses,” he says.

The fintech is insured by the Federal Deposit Insurance Corporation (FDIC) through a partner bank, Evolve Bank and Trust. The partnership gave the fintech a good deal on splitting the interchange fee, securing Dave a big revenue flow which many young fintechs depend on to survive.

Now read: Funding the revolution: the dawn of digital banking