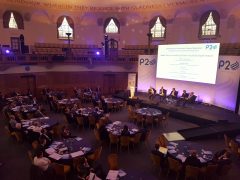 The UK regulator’s executive director of strategy and competition Christopher Woolard told an audience at the P20 Global Payments Conference in London this week that the experimental digital currency could pose a massive risk to an already-huge money laundering economy, which currently makes up 3% of GDP.

With $1.6 trillion laundered each year through the financial industry, Woolard suggests this figure could rise if Libra does not bend to regulatory authorities and respect the already-established payment services which tackle financial crime.

Woolard makes it clear that the regulator will only support companies who innovate, collaborate and share data, saying these factors are crucial to reducing fraud in the financial sector.

The executive cited the second Payment Services Directive (PSD2) and application program interfaces (APIs) as routes to this regulatory backing, stressing that innovation means complying with regulation just as much as it means connecting the world together through open banking.

Back in July, Woolard acknowledged the announcement of Libra, saying in another conference: “Historically, this may have been a sector that has lived by the mantra of ‘move fast and break things’, but the issues raised here require deep thought and detail.”

The regulator recognises that the UK’s regulatory sandbox, though successful in managing some tensions, is now facing a real challenge to the financial services system.