Payments provider Elavon, a subsidiary of US Bancorp, is deploying 1,100 cashless terminals across the UK for The Royal British Legion’s Poppy Appeal. 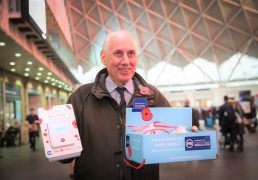 The fintech says it’s the “largest-ever deployment of cashless terminals for a charitable campaign in Europe”, allowing people to donate through bank cards, mobiles or smart watches.

The legion, whose collaboration with Elavon was facilitated by Santander, wants to utilise cashless payments to “increase revenue and simplify administrative efforts”.

“This is an exciting step for us,” says the charity’s assistant director of fundraising Simon O’ Leary. “Often, people want to donate but can’t as they don’t have cash handy. By working with Elavon, we can make it simpler for the public to support our Armed Forces community.”

Kicking off in Leeds, the campaign will also reach London, Birmingham, Bristol and Manchester. Elavon’s UK employees will also be volunteering alongside the legion today in London.

“The introduction of contactless payments by the British Legion is on a larger scale than that previously undertaken by any UK charity – we see this as a step change for charities looking to move with the times,” says Santander’s UK head of charities London and South East Olivia Moorby.

This fintech-charity partnership follows fellow paytech start-up GoodBox crowdfunding £1 million for its contactless offering for charities. GoodBox is backed by WorldPay and Visa executives, suggesting the concept is spiking interest from big players.