The Open Banking Implementation Entity (OBIE) will be releasing official figures at the end of this year which show the number of people who have activated open banking features through one of the big nine UK banks, and OBIE trustee, Imran Gulamhuseinwale, hints that it’s in the “hundreds of thousands”. 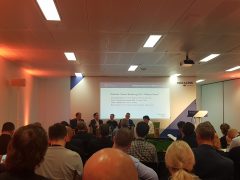 OBIE: “There are some early adopters who are really using it”

“There are some early adopters who are really using it,” says an excited Gulamhuseinwale, who explains how the OBIE has asked banks to provide the information on their consumers for the official figure release.

The big nine banks in the UK, which represent around 95% of the market according to OBIE, include HSBC, Lloyds, Santander, Standard Chartered, Nationwide, Barclays and Royal Bank of Scotland, among others. An activation of open banking through one of these banks is determined in the survey as the connection between an authorised third party provider (TPP) to a bank.

On a panel for UK Finance’s Digital Innovation Summit 2019, Gulamhuseinwale points out that although the country is arguably 90% through the implementation period, customer adoption is still in its very early stages.

This adoption stage of open banking is seen as the last stage in meeting the Competition and Markets Authority’s (CMA’s) objectives, which required larger UK banks to adopt and maintain a common standard for open application programming interfaces (APIs). Although 98% of current accounts are now on the same regulated API according to the OBIE, consumers still need to adopt what this enables.

Having a regulated API across the UK banking industry means 60%, all the way up to 98%, of the financial services market share can be taken up by third-parties, says Gulamhuseinwale.

When it comes to establishing unanimous standards across borders, fellow panelist Mastercard’s product lead in open banking says one standard API globally will be hard. Because of “quite a lot of different individual interpretation”, countries would struggle to work together on an overall API.

That being said, the Nordic countries seem well on the way with the establishment of P27, which sees the formation of a central payment system used by six Nordic banks to process all payments.

Read on: Swift and HSBC team up for common API standard in Hong Kong