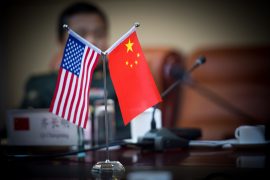 South China Morning Post reports that China’s securities watchdog has announced that limits on mainland-based futures firms will be ditched on 1 January next year. Caps on mutual fund companies and securities firms will be scrapped on 1 April and 1 December 2020, respectively.

The move is believed to be part of the trade war with the US, to open up Beijing’s finance sector and encourage greater competition.

This deregulation means that foreign-based enterprises will be able to set up wholly-owned units on China’s mainland to deal with futures, mutual fund management and securities.

Wang Feng, chairman of Ye Lang Capital, told South China Morning Post: “Scrapping the ownership levels will give foreign players an opportunity to better tap the mainland securities markets. But the market will still be dominated by China’s home-grown companies for a few years.”

The CSRC had reportedly been reluctant to raise foreign ownership limits previously due to fears that local firms could not compete with larger foreign institutions.