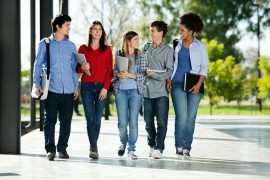 Summer wants to help US students deal with their debt

US-based student debt adviser and “simplifier” Summer has raised $10 million in a Series A funding round led by QED Investors, TechCrunch reports.

The fintech is gearing up to support 120 loan forgiveness programs across the country, breaking down the rules for post-graduates so they can make informed payments relative to their salary after they leave university.

Founded at Yale, Summer’s team of 13 has now relocated to New York City and says it has helped 10,000 borrowers since it launched in 2017. The firm has helped borrowers save $8 million this year.

“We’re trying to create the software that democratises [student loan] expertise, that gets the expertise into the hands of the end consumer, who might not be able to afford an accountant that doesn’t even unfortunately exist in the student loan space at this current moment,” says Summer’s co-founder and CEO Will Sealy.

Summer makes its money by selling its service through companies who can offer it to their student loan-paying employees, rather than charging the end user, who the firm says pays nothing for the expertise. Sealy says Summer wants “to save the people who are struggling” in the present first, which is why it currently does not offer a service to undergraduates.

Looking ahead, the fintech is also eyeing up another hundred other student loan proposals on top of the 120 it already supports, which are currently sitting in US state legislatures.

Other names in the funding round included General Catalyst, Greycroft, NextView Ventures and Story Ventures.

QED’s partner Matt Risley, who has previously worked for Klarna as CFO, says the investor put “a pretty big round into this company on the belief that there’s an urgent problem facing these student loan borrowers and we’re working hard … to scale to meet the needs of tens of millions of student borrowers”.