Sibos 2019: Banks should stop waiting for political uncertainty to end, it won’t

We are experiencing a wave of nationalism and political uncertainty, but banks need to stop waiting for this season to change and start adapting to it because it won’t disappear any time soon, says City University of London’s finance lecturer Angela Gallo at Sibos London.

Having been the largest beneficiaries of the previous wave of globalisation, Gallo predicts global banks will suffer the most from this current, increasingly insular geopolitical climate, especially if they don’t adapt their infrastructure to lend to a permanently unstable status in politics. 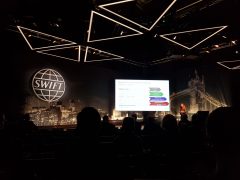 Gallo predicts global banks will suffer the most from this uncertainty

The focus in the last five years on state politics and ‘taking back control’ is partly a product of the inequality created by globalisation, says Gallo, who uses examples such as Brexit and the US’s protectionism against areas such as Europe and China.

How can banks react? Gallo says they need to innovate, not only in their products but also in their regions and how they define their geographical landscapes. They need to build up their resilience to geopolitical shocks and be more flexible in the face of new regulations.

The way banks react will determine how long it takes to reach a less globalised world, says Gallo, who points out that this confusion between political and economic decisions is now unavoidable.

As banks are drawn further into political dynamics like Brexit, unpredictability becomes a token consideration for financial firms doing business with the UK, leading to patterns of inaction and bottlenecking.

“But banks can no longer postpone investment decisions until things become more certain,” concludes Gallo. “They must adapt to a permanent state of uncertainty and relinquish expectations of a return to political stability.”