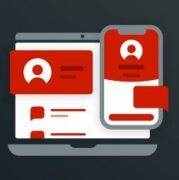 OutSystems: “Banking at the drop of a fingertip”

By “dumbing down the back-end” so it becomes “a system of record only”, OutSystems will take on all the business logic and process for Nationwide, giving it a more agile front-end with less reliance on its legacy back-end.

OutSystem’s regional financial services and insurance director, Garry Larner, tells FinTech Futures: “There’s a lot of legacy technology out there. It’s difficult and expensive to find talented developers, especially when it comes to native mobile. It’s becoming too costly to innovate, so that’s where we come in.”

He adds: “In an ideal world you’d want to rip everything out and start from the beginning. But from a practical view, that’s not possible unless you’re prepared to spend hundreds of millions.”

The software platform can offer a traditional bank like Nationwide access to accelerators, such as templates, patterns and multi-factor authentication plugins which all speed up the UX development process.

It’s newest partnership with Nationwide is all about “creating the digital channel for business saving customers. Banking at the drop of a fingertip.”

Speaking more broadly on low-code, Larner recognises the “enormous” market opportunity, excited the industry is “finally catching up with the concept challenging the status quo – that traditional development is not the only option.”

OutSystems has had a 54% yearly growth rate globally and enjoyed a $360 million investment from Goldman Sachs and KKR last year.

Larner reveals: “There’s going to be a series of very large enterprise customers which we’ll be announcing over the next three or four months, because it’s almost caught up with the mainstream.”

Currently OutSystems works with British councils to digitise taxes, insurance companies to build broker portals, and, most recently, it is working on a new credit comparison market with a fintech to be announced soon.