PayPal co-founder Max Levchin’s new pay later business is said to be raising as much as $1.5 billion in debt and equity, TechCrunch reports.

According to people with knowledge of the company’s fundraising activities, Josh Kushner’s New York venture capital firm Thrive Capital is said to be leading the financing, with participation from the Spark Capital. 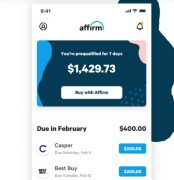 It’s been assumed that the funding round will be largely made up of one financial institution’s contribution known as a warehouse facility.

In a Series F funding round led by Thrive earlier this year, Affirm raised $300 million and announced a new valuation of $3 billion. So far, the fintech unicorn has raised $1.03 billion.

Affirm gives people the chance to buy luxury items in three-, six- or 12-monthly instalments at 30% interest APR, unlike other luxury item competitors such as Laybuy who offer six weekly instalments with no interest.

With a minimum credit score or income required, Affirm makes money the same way as a credit card provider by offering personal loans to people who otherwise couldn’t afford the item.

The pay later platform has also rolled out a lending service exclusively for businesses called Resolve. The new venture avoids “over reliance on email, call centres, faxes and manual invoicing processes,” it said in a press release earlier this year.