Commerzbank plans to cut 4,300 jobs, close 200 branches, sell its Polish subsidiary mBank and absorb compatriot bank Comdirect in a restructuring strategy published in the wake of its failed merger with Deutsche Bank.

Part of the “Commerzbank 5.0” restructuring strategy, announced Friday, involves the “regrettable but inevitable” cutting of 4,300 full time positions. Following this, the bank plans to hire 2,000 new positions, leaving a net loss of 2,300 workers. It currently employs around 40,700 people. The bank is also planning to close 200 branches across Germany. 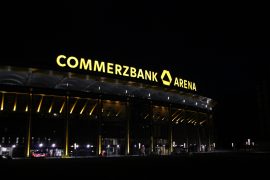 Commerzbank plans to invest €1.6 billion ($1.77 billion) towards its new strategy

Commerzbank plans to invest €1.6 billion ($1.77 billion) towards its new strategy, with €750 million ($825 million) of that figure dedicated to the digitisation of its IT infrastructure. A further €850 million ($935 million) will be put towards restructuring costs.

Some of these costs could be recouped by the potential sale of the bank’s Polish subsidiary mBank. Commerzbank signed a partnership agreement with the bank in 1994 and has increased its stake to 69.3%.

The sale “would allow [Commerzbank] to generate the financial resources [to enable] a faster implementation of its strategy and the associated investments,” says the bank in an online statement.

Commerzbank expects the sale – which has a market value of $2.2 billion – to reduce its risk-weighted assets by around €17 billion ($18.7 billion).

While Commerzbank shifts its investment in mBank, it plans to increase its 82% stake in another of its subsidiaries: direct bank Comdirect. Founded in 1994 as a digital offshoot of Commerzbank, Comdirect is the third-largest direct bank in Germany, with an equity of €636 million ($700 million).

“As the business models of Commerzbank and Comdirect become more closely aligned on the back of progressive digitalisation,” the bank said, “Commerzbank is considering making a purchase offer to Comdirect’s outstanding shareholders under usual conditions.” The lender expects a 25% premium on the remaining shares.

The draft measures of the new strategy are set to be discussed at a meeting of the supervisory board on 25 and 26 September. The bank stresses that no final decision has been made.

Commerzbank and Deutsche Bank called off merger talks in April over concerns that benefits of the deal would not outweigh its cost. The deal was seen as a way of reviving the fortunes of both lenders. The German government still owns a 15.5% stake in Commerzbank, acquired after the bank was bailed out following the financial crisis.