RBS and Natwest’s online banking websites went down once again following on from an IT outage on 21 August.

This time, the pair’s online services were inaccessible for several hours. RBS, which owns Natwest, said both the websites were now both working again. 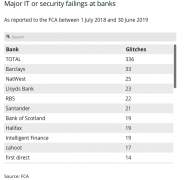 Both websites were out of action from 09:00 am BST. In RBS’ case the disruption lasted seven hours, while Natwest’s online banking was down for nine hours.

The websites for NatWest and RBS – both part of the RBS Group – have been showing a 502 Bad Gateway error, which signals a general server problem. This shut down both sites completely, rendering them inaccessible to millions of customers.

RBS had suggested customers could use other methods to access their accounts, including mobile apps, ATMs, telephone banking, or going into a branch.

The bank has not explained what caused the problem, but simply said its websites were now “both up and running again”.

At 15:00 BST, the NatWest Help Twitter account had told a customer the bank did not know when the problem would be resolved.

An RBS spokesperson earlier told the BBC that customers were experiencing issues accessing its websites and online banking login pages.

Nearly every single UK current account provider suffered at least one major IT or security glitch during in the space of a year.