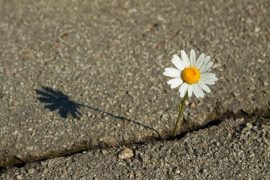 “What will you really get out of this if you persevere that is worth persevering for?”

Many many years ago, I ended up having a conversation about how unhappy I was in my job with a friend’s New Age new boyfriend. The boyfriend is now a husband and still a hippy. He still comes out with words of great wisdom and although many years have passed and we have had many conversations, this one I remember like it was yesterday.

I was saying I did not know how to handle my boss’ mood swings, cruel ways and confrontational style. I was saying I was ready to walk and that it felt like giving up and giving in, but even the thought of going to work made me unhappy and stressed and nervous.

And was it worth it? It affected my days at work and beyond. It was eating away at me. But I am not a “throwing in the towel” kind of girl and the urge to fight on was keeping me fighting on.

And he said, “a flower can push through concrete. But it doesn’t have to. What will you really get out of this if you persevere that is worth persevering for?”

I learned my lesson through this. But the learning didn’t come that day.

It came slowly. In waves. With distance.

I am that guy

The first few days of being out of that job, I was walking on air.

Like stepping into the sun after a long stint in a dark room.

Not walking on eggshells. Not bracing yourself for whatever madness may come your way. Not second-guessing every word you say for fear of trigerring a reaction.

But the relief was short-lived. Because it dawned on me before long that I had been bullied.

And that me being strong and resilient and tough didn’t mean squat. It didn’t make me impervious. It didn’t shield me. I had been bullied. It had happened to me and while it was happening I was reflecting on and controlling my own behaviour, trying to not waken the beast and whatnot. I wasn’t aware I was being bullied as it happened. But when I stepped out of the situation, it was clear as day. It had happened and my resilience had helped me survive it but had not protected me from it.

And in fact, had it helped me at all?

Did my resilience help me survive or did it keep me there in absurd heroics, dealing with unacceptable, unfair and undeserved behaviour in an entirely misplaced attempt to not give up on something I should not have considered worth fighting for in the first place?

A sobering lesson. And a hard one to stick to. But possibly the greatest thing that mad woman taught me, inadvertently.

The second thing I learned wasn’t a happy realisation either.

It came in dribs and drabs in the months after I left that job and settled into another one.

It was a hypersensitivity to a change in tone coming from seniors or customers, an alertness to triggers or signs of bad behaviour “from above”. An overdeveloped sense of self-censorship. An instinct I had never had before, now on permanent high alert.

It was not needed. But it was there.

A survival trait forging a bad habit, a habit formed under harsh conditions that was hard to shed. I shed it. In the end. But it took time and effort and a string of great bosses to get there.

One of whom once answered my question of “how do you deal with a bad boss” with the last thing I expected to hear: “you get away from them”.

Their inadequacies as humans are not yours to fix or carry.

Because I had never until that moment thought about the workplace as a locus of equal exchange: where I give my time, labour, ideas and creativity and take home more than my salary. Her statement was a shock and a sudden illumination of blinding proportions.

The workplace needs to give you more than your salary. A bad boss doesn’t. You owe it to yourself to move away. What an incredibly, deliciously revolutionary thought.

Bring your whole self to work

Those were the words of my boss a few years later. And the final lesson.

What do you mean? I asked, slightly defensive, hearing a criticism and not an invitation. Thinking “here we go again”, reliving experiences I thought I had left behind. But he smiled and persisted.

Bring your whole self to work. The crazy. The insecure. The intense. The angry.

You are more than what you do. And you are here most of each day, most days a week. You are robbing yourself by not bringing your whole self to work. You are also robbing us.

Man. No, I said. My whole self is intense. It says no, and are you nuts and WTF a lot. It tolerates no stupidity, no lack of integrity, no compromise to core values. And has no time for people looking for excuses. My whole self is a pain in the proverbial.

Good, he said. Bring her to work, I look forward to meeting her.

But I had been burnt before. So I didn’t take him at face value immediately.

And it accelerated my career.

More than the education, the delivery record, the experience. It turned out my prickly, explosive, intense and difficult personality of high octane honesty and unbridled enthusiasm, silliness and pessimism in a weird blend that says “shoot for the moon, prepare for the fall, rinse, repeat” was more useful to the bank, to my team and to my career than anything I had learned or done along the way.

It turned out being happy at work also made me better at my job.

It turned out that moving away from bad bosses was not good advice, it was essential advice.

It turned out a flower can push through concrete. But it doesn’t have to. And it is probably shouldn’t even try. It should consider its options and go somewhere more giving. Somewhere where it can bring its whole self to work.