Most successful Kickstarter campaigns revealed: is crowdfunding the future of fintech funding?

As of April 2019, Kickstarter projects had an overall success rate of 36.86% according to Statista, with $4.2 billion pledged to successfully launched projects. In light of Kickstarter’s ten-year anniversary, here we’ll assess the importance of crowdfunding for fintech companies before looking at some of the platform’s most successful ideas, as revealed by research from Betway.

The importance of crowdfunding for fintech companies

For fintech companies especially, receiving the funding to bring ambitious challenges to life can be difficult, especially when we consider the emerging regulatory landscape faced by many businesses and investors.

As banks became less willing to lend to start-ups following the financial crisis of 2007-2008, entrepreneurs and fintech businesses needed to find new ways to fund their ideas. Since then, we’ve seen a number of fintech companies like Monzo appeal directly to their customers for funding via crowdfunding websites sites such as Kickstarter.

Launched in 2009 immediately following the crash, Kickstarter revolutionised financing for budding ventures which previously would have required those looking for the funds to go as far as remortgaging their homes or taking out a second charge mortgage; Kickstarter really helps in taking the concept in question to the mass-market. Now, with millions of people turning to the site to help make their ideas a reality, Kickstarter is a cornerstone in the funding market for fintech companies.

As the below infographic from Betway shows, Kickstarter has helped to launch a number of successful projects over the past decade. 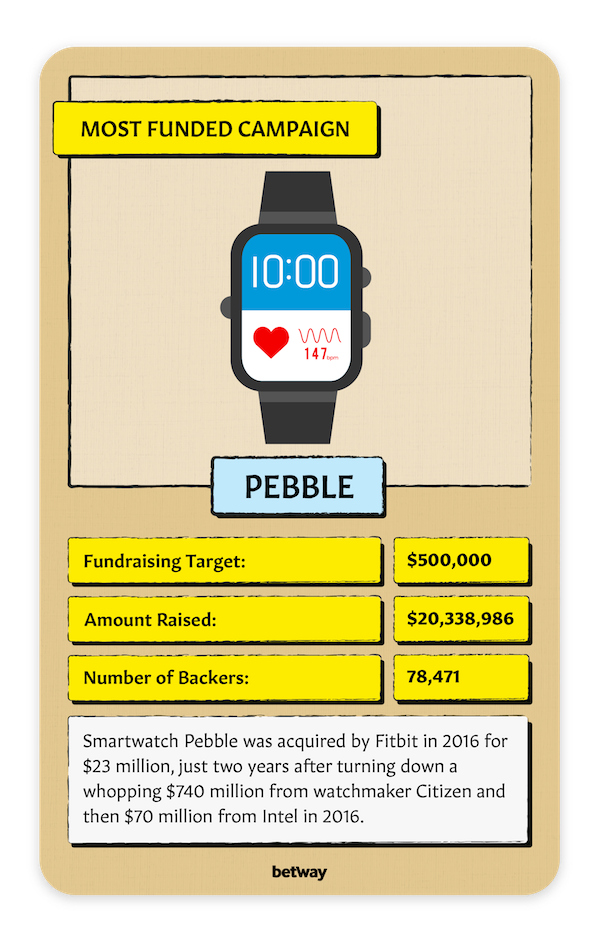 To this date, smartwatch Pebble Time remains the most funded campaign, achieving its $500,000 goal in 17 minutes. Within an hour, it received $1 million in funding, before eventually earning over $20 million by the time that funding closed.

However, Pebble Time doesn’t hold the record for the highest number of backers for a campaign, as card game Exploding Kittens attracted 2.77 times as many, with 219,382 people investing. Billed as a “highly strategic kitty-powered version of Russian Roulette”, it eventually raised over $8.8 million thanks to the help of a unique marketing strategy where Kickstarter investors were invited to complete tasks and fun games while the card game was in development. During the past decade, over $305 million has been pledged via Kickstarter to games projects according to figures obtained by CNN, with Exploding Kittens being by far the most successful of these. 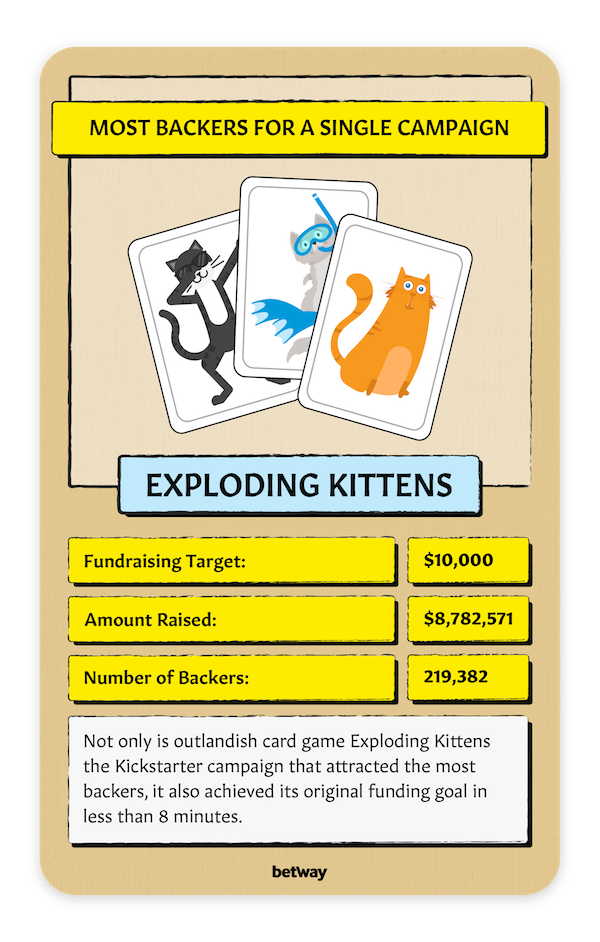 In terms of commercial viability, however, Oculus Rift remains Kickstarter’s most successful campaign. Although the project didn’t raise as much money as Pebble Time, the company was eventually bought by Facebook. At the time, a rumoured $2 billion figure was quoted for the sale, but this was later found out to be $3 billion according to a Tech Times report. As well as helping bring the Oculus Rift product to market, Facebook’s buyout also helped to convince people of the viability of starting hugely successful businesses via start-up websites like Kickstarter. In addition, it also proved that technology providers particularly could gain the funding they required for ambitious projects such as virtual reality headsets.

The future of fintech and crowdfunding

With the UK’s fintech industry receiving over $3 billion in investment in 2018 and crowdfunding becoming an increasingly popular investment type for fintech companies, the outlook for 2019 appears positive. With the right backing, we may even see an emerging fintech company that’s listed on Kickstarter such as Pigzbe outperform Oculus Rift, Pebble Time and others.

Some of this data was provided by Online Casino Betway