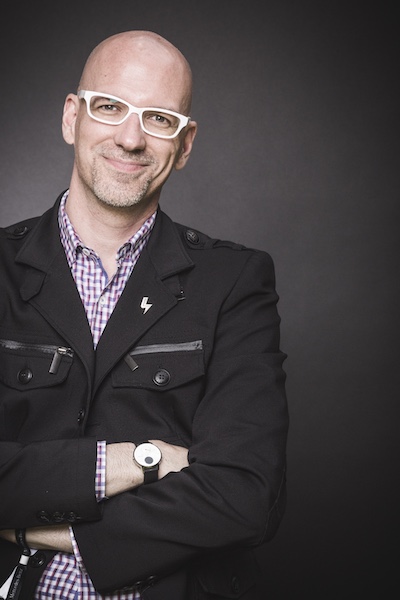 In a wide ranging interview, Lloyds Banking Group’s chief design officer, Dan Makoski, talks to Martin Whybrow about his role, the need to listen to customers rather than follow the fintechs, what human-centred design means in financial services and why his “bullshit” meter went off when he first spoke to the bank.

Will one day every bank have an executive-level chief design officer (CDO)? One of this currently rare breed is Lloyds Banking Group’s Dan Makoski, who has been in position since July 2018. He was previously at Walmart (vice-president of design) and, prior to this, at Google (head of design/advanced technology and projects) and Motorola Mobility (global head of design research), among others.

In Silicon Valley, it is now usual to find this role at a vice-president or other executive level but, says Makoski, “in the world of finance, there are not a lot of examples”. Often, where there is a specific design function, it is at a middle management level and is about “tactical delivery”, making things look “shiny”. Where there are currently such senior level CDOs or equivalents, these tend to be in fintechs. That looks set to change.

Makoski’s initial discussions with the UK bank started around three years earlier. In the end, what tempted him across was the bank’s vision. He admits that when he first heard Lloyds Bank’s ‘Helping Britain Prosper’ strategy, on the one hand he was excited about the potential social impact but, on the other, “my bullshit meter went off”. Unveiled in 2014, that strategy states: “We believe we have a responsibility to help address some of the social, economic and environmental challenges that the UK faces”.

After discussions with the bank, including with CEO, António Horta Osório, and transformation group director, Zak Mian, he was convinced that this wasn’t a glossy sheen for business as usual and that the new CDO role was a key one for putting it into practice.

“Design, like technology, is a strategic superpower that can be used to do incredibly bold things,” says Makoski. And as a reflection of the challenge, he cites the Google autocomplete suggestions when you type in “My finances are…”. Its top responses include “a disaster”, “a mess”, “out of control” and “making me depressed”. “That Google search is why I am here,” he says.

Tangibly, the response means finding ways to help the most challenging households and people because, “if we can help them, then we know we can deal with all of the less complicated scenarios”.

At present, it is a relatively small design team within Lloyds’ 75,000 staff but there are “some bold intentions to build the capability”. In Silicon Valley, the ratio of designers to engineers might be one-to-six or one-to-eight and there will not be this ratio within financial services but a team, already made up of a couple of hundred, is coming together at the bank.

The majority are new recruits, including apprentices, but some have moved from other parts of the bank, including the branches and group IT, where they have shown a passion for design. The most important quality, says Makoski, is empathy – “a real desire to meet people’s needs”.  These are “not just visual UX [user experience] designers” but have a range of social science backgrounds, including sociology, psychology and anthropology. There are also writers in the team, focused on how best to communicate with customers.

That need for empathy stems from the essential role of listening to the customer, inviting them in not merely to look at what is under development but to provide input from the outset. There is no point talking open banking or PSD2 with customers, he points out, it is more about issues such as how they want to view and manage their finances in one place.

As an early example of the types of work being undertaken, the bank is integrating the Google Maps API with account statements, so that customers can click on a transaction and see where it was made. Apple Card is doing something similar, says Makoski.

“We need to reimagine our digital future from the perspective of customers.” He points to Walmart, arguably the world’s largest company based on many dynamics, with 2.6 million associates, which “completely redesigned every pixel associated with walmart.com”. It focused on people, not competitors, and this is one of Makoski’s key messages.

The bank is less focused on fintechs and its competitors than on its customers. With fintechs, “there is a lot to admire and it’s great that they build a higher bar for everybody” and it is not that Lloyds Bank is “blasé, lazy or doesn’t care” about them, challengers or its fellow big banks, but there’s a danger of following the competition rather than your own strategy.

“We take more inspiration from the lives and experiences of ordinary UK citizens than the competitors, about the way they think about money”. As Microsoft, Google and Walmart have shown, “when you focus on customers, amazing things happen”.

He believes the leap forwards could be comparable with some of the big tech milestones of the past, such as when command line interfaces replaced punchcards. Or when, in the first half of the 1970s, a Xerox Park researcher envisaged how people might want to use computers, creating a simple schematic that paved the way for the world’s first GUI-based computer, Xerox’s alto, from which Apple was born.

In the financial sector, he sees a likely transformation of the ledger. Although digitalised, it still reflects its 400 year-old heritage, now being little more than a spreadsheet and only informing about the past. “Numbers alone don’t help ordinary people to prosper”. He anticipates a new design language that will fundamentally rethink how financials are presented, constituting a single snapshot of a person’s overall financial health, including aspects such as their spendable cash, credit card debt and expenses.

Makoski also feels that smart contracts will have a role to play. This concept underpins the design of Thought Machine’s emerging Vault platform (Lloyds invested £11 million in this UK company, taking a 10% stake, in November 2018). He believes smart contracts are “really interesting” and will allow for adaptive, flexible financial products, rather than the current “one-size fits all based on classes of risk”. As is happening in car insurance, with premiums linked to customers’ driving behaviour, so he can see banking products similarly linked to individual customers’ attributes where they are willing to share relevant information.

In terms of the technology to support this, artificial intelligence (AI) and robotics will have a role, so too virtual assistants (“providing a more conversational connection with their finances”) and, “further out” mixed reality, providing financial information in context, such as when out shopping. The technology will free up staff to work on the more “high-touch, complicated customer interactions” and he foresees employees and virtual assistants having “a harmonious relationship”.

The bank’s aim is to be “the most advanced human company, powered by technology” and he emphasises again that it will be “driven by AI but, more importantly, by empathy and design principles”. Everyone will have AI, blockchain and so on but the differentiator will be how they are used. This new future will also need to be backed up by deep data ethics, he adds, with the bank actively engaging with the different potential models for this, such as data trusts.

The challenge shouldn’t be under-estimated, not least due to the size of the Lloyds Banking Group and its many touchpoints. That design language will be needed for every point of a matrix that spans the main brands of Lloyds Bank, Halifax and Bank of Scotland, the product set of current accounts, savings, personal loans, credit cards, mortgages and others, and every channel, including branch and telephone, for its 30 million+ customers.

How receptive was the rest of the bank to the new function?

There is a need for a cultural change but Makoski is based at the bank’s 48 Chiswell Street office in London, which has a long-standing reputation within the group for trying to be more agile and interactive, as reflected in the fact that it has long been nicknamed internally as the “Google building”. “There are no free lunches, no Sergey [Brin, co-founder of Google] or Larry [Page, Google CEO] going around the building, no nappods” but it does have more of the feel of a start-up.

That culture change, applicable to the banking sector as a whole, in part revolves around a tendency to still view digital as something separate rather than as inherent to the whole business. “When you say ‘digital’ something, then you don’t quite get design,” he says. There is no ‘digital group’ at Google, for instance.

On the reverse of Makoski’s business card (which he redid on joining as he didn’t like the design) is reads “Chief Goo Unblocker”. There will always be the need to be secure, comply with regulations, manage risk but there’s also the mentality of “that’s just the way we’ve always done it” to move away from.

On the up-side, he was pleasantly surprised by the bank’s large IT infrastructure. “I expected it to be pretty antiquated and, while we do still have a mainframe somewhere, I was really impressed with our digital estate”. It was more advanced than he expected and “in many respects, it is pretty darn good”.

And some of the bank’s partners are aligned with the design approach too. For instance, he says Phil Gilbert, general manager of IBM Design, is “a great partner for us”. IBM Design is described as focused on “recruiting and retaining top designers, scaling the consistent practice of great design across IBM, and simplifying access to IBM’s broad portfolio of capabilities”.

That new design language that Makoski referred to won’t necessarily be something that you’ll see written down but rather, he says, something that you will feel. And it’s clear that he’s enjoying the challenge. “I am in an incredible place of learning,” he says. While he is a scarce pioneer at present in financial services, there is every chance that, as happened with the CTO position, one day all banks will have a CDO.