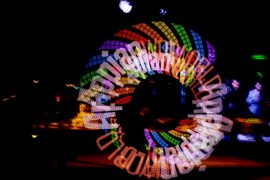 US cloud computing specialist Appian Corporation is focused on revolutionising call centres, but also harnesses artificial intelligence (AI) to address challenges such as the demise of Libor.

At a time when customers’ expectations are steadily growing, it’s surprising to learn that a recent estimate put the cost of poor customer service for US businesses at $75 billion a year in lost revenue. Given its smaller size, a corresponding figure of £37 billion (about $48 billion) for the UK makes its performance even worse.

Cloud computing company Appian believes that intelligent automation can make such figures history, if harnessed by companies and organisations to significantly improve the customer experience and, in turn, customer retention. The Reston, Virginia-based company celebrates its 20th anniversary later this year and has grown from a fledgling business founded towards the end of the Nineties tech boom to one generating annual revenue of $115.7 million in 2018, up 40% on the year before.

That growth over two decades was evidenced this week by the three-day Appian World event in San Diego, which drew 1,500 delegates to the Californian coastal town and featured a reception on board the Second World War naval aircraft carrier USS Midway and former tennis champion Andre Agassi as guest speaker.
During its lifetime, the company has developed from a writer of customer software to one that specialises in selling cloud development application-platform-as-a-service (aPaaS) to companies in various sectors. They can use this as the basis for building enterprise software applications, with Appian’s focus on low-code development platforms as the building block for high-impact business applications, business process management and case management.

Low-coding makes it easier for companies to develop apps that can work across a wide range of devices, including smartphones. Currently low-code has only an 11% share for building enterprise applications against 59% for out-of-the-box apps and 30% for custom codes such as Java and Net. Appian’s chief executive, Matt Calkins, approvingly cites a forecast by market researcher Forrester, that low-code’s share is set to nearly triple, to 30% – largely at the expense of custom code, which will decline to 16% 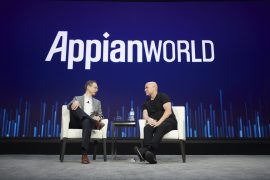 As one business analyst recently noted, low-code development presents companies and organisations with the opportunity to increase their digital footprint and improve their customer service without having to hire a large IT team. It is also around 20 times faster than conventional methods and is proving increasingly popular with university students.

This confidence in low-code’s future saw Appian as the first developer to go public, with an IPO two years ago, when the stock jumped by 39% from its $12 opening price on the first day of trading (this week it has traded at around $34 but has previously broken $43).

As Calkins acknowledges, his company has a number of larger competitors that include IBM, but he believes Appian has superior customer outcomes – or happier customers. It now has approaching 450 clients, with the financial sector accounting for around one-third and both pharmaceuticals and government about 20% each. The remainder is spread over life sciences, telecommunications, media, energy, manufacturing and transportation.

Appian’s promotional line is that in order to stay competitive, financial institutions must leverage a technology platform approach to streamline, automate and engage both their agents and customers for strategic advantage. The UK is the company’s second-largest market after North America, with Barclays and Santander among its clients as well as insurer Aviva.

This tech transformation centres on the call centre. As a 2017 Gartner report noted: “The call centre has morphed into a customer engagement centre, with multichannel support and model-driven case management capabilities at the core”.

Appian identifies three common pitfalls afflicting banks’ and insurers’ call centres as disappointing customer expectations (nearly nine in 10 switch brands after a poor experience and 81% say they are willing to pay for a better experience); customer churn (around 1.2 million UK bank customers move their current account to a different bank each year, resulting in revenue redistribution upwards of €325 million); and employee turnover (engaged customers connecting with engaged employees boosts performance-related business outcomes by as much as 240%).

The company reports that it has enabled Barclays to transform the customer experience at its call centres, with the bank achieving a 64% increase in customer satisfaction and 84% increase in efficiency within six months.

For Aviva UK, providing a single unified location for its call centre and operations teams saw data from 22 separate systems consolidated to four Appian applications. Customer service operational expenses were reduced by more than 40% within six months, while service response times were nine times faster than previously. The average time taken to switch funds was reduced from 45 minutes to five, while fund transfer outs are now completed in a day instead of nine days.

Calkins stresses that the successful financial institutions of the future will be those where the work is distributed between people, AI and robotic process automation (RPA) and orchestrated by an intelligent automation platform to maximum effect.

“Our job is to coordinate these three factors so that AI can take the more routine tasks,” he adds. “People can handle the exceptions that come out of RPA and devote more time to dealing with customer service.”
In this new environment, intelligent chatbots, RPA-assisted tasks, etch-assisted case management and AI recommendations will combine in providing a much-improved level of customer service. 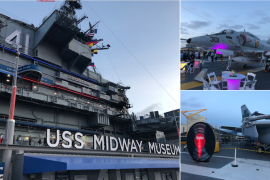 For individuals in the financial services sector who are reasonably tech-savvy, the company’s promise is that within two weeks they can become an Appian developer within two weeks and have their first project developed within eight. Financial services group Standard & Poor’s (S&P) Global is cited as one client that successfully put a call centre app to help employees through HR issues live in eight weeks.

Since 2013, the company has annually announced developments towards making that speed of development possible. This year Appian announced that it is making available to customers Appian AI, adding “best-of-breed artificial intelligence capabilities” to any application built on the Appian platform. Appian AI services include Google Translate API, Google Vision API and Google Natural Language.

Of particular interest to companies with contracts based on the London Interbank Offered Rate, aka Libor, which is due to be phased out at the end of 2021, AI can now be used to scan documents and identify those based on the now-discredited benchmark. KPMG’s team has built the Libor app on Appian, which is a feature of the auditing firm’s AI-empowered Ignite platform launched in October 2017.

The app removes the laborious manual task of checking millions of documents for Libor dependency, with AI also employed to suggest alternatives where it is identified.

Appian is also collaborating with the Swift financial messaging network in the latest stage of its global payments innovation (Swift gpi) initiative launched in early 2017 with the aim of making cross-border payments quicker and more transparent.

As Daniel Lynch, Swift gpi manager for the Americas explained, Swift gpi Appian Case Resolution, currently in its pilot phase with 16 banks, will aim to fast, efficient investigation of payments that flag up an inquiry. It will employ AI to “remove friction” from interbank payment investigations by improving transparency, shortening resolution times and reducing the need for manual interventions and will also integrate with banks’ existing infrastructures.